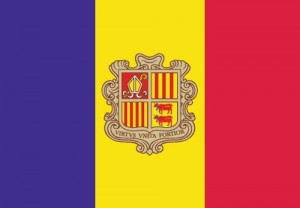 Andorra, officially the Principality of Andorra, also known as the Principality of the Valleys of Andorra, is a landlocked state in Southwestern Europe. Located in the eastern Pyrenees mountains and bordered by Spain and France, Andorra is the sixth smallest country in Europe, having a total area of only 181 square miles. The 2013 population of Andorra numbers only 85,293 inhabitants, which makes it the world’s 200th most populated nation and one of the least populated states in Europe. The capital and the largest city in Andorra is Andorra la Vella, with almost 64,000 people and a density of 1,922 inhabitants per square mile.

The history of Andorra begins when Charles the Great granted a charter to the Andorran people in return for fighting against the Moors. At first, the territory was ruled by the Count of Urgell and later by the bishop of the Diocese of Urgell. In 988 the Count of Urgell gave the Andorran valleys to the Diocese of Urgell in exchange for land in Cerdanya (today divided between Spain and France). Starting 1278, Andorra’s sovereignty was shared between the Count of Foix and the Bishop of Urgell, with the the first co-title being eventually passed to the kings of Navarre.

In 1607 King Henry IV of France issued an edict that established the head of the French state and the Bishop of Urgell as co-princes of Andorra, while in 1813 the First French Empire annexed Andorra as part of Catalonia. During World War I, Andorra declared war on Germany, but didn’t take part in the fighting. However, it remained in an official state of belligerency until 1958 as it was not included in the 1919 Treaty of Versailles. Andorra was occupied by France in 1933, due to social unrest. During World War II, the Principality of Andorra remained neutral. Present day Andorra is a unitary parliamentary constitutional diarchy ruled by co-princes Joan Enric Vives Sicilia (Bishop of Urgell) and Francois Hollande (President of France). Andorra is a full member of the United Nations (UN), the Organization for Security and Co-operation in Europe (OSCE), the Council of Europe, and has a special agreement with the European Union (EU). 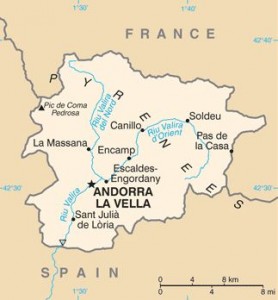 Located in the eastern Pyrenees mountains and bordered by Spain and France, Andorra has an area of only 181 square miles, making it the world’s 196th nation by land mass and Europe’s sixth smallest country. Andorra is also one of Europe’s six microstates, along with Liechtenstein, Malta, Monaco, San Marino and Vatican City. About 2.5 times the size of Washington, DC, Andorra has 74.7 miles of land boundaries, 35.1 miles with France and 39.6 miles with Spain. The country’s territory is divided into seven parishes and its landscape consists predominantly of rugged mountains. The highest point in Andorra is the Coma Pedrosa at 9,652 feet, while the lowest point is the Gran Valira river at 2,756 feet. Due to its high elevation, Andorra has alpine and continental climate with snowy winters, lower humidity, and slightly cooler summers. Avalanches are the only natural hazards that take place in Andorra, while common environmental issues are deforestation, air pollution and solid waste disposal.

With a population of only 85,293, as reported by the CIA World Factbook (October, 2013 estimate), Andorra is the world’s 200th most populous nation. By density, the Principality ranks 71st among the world’s sovereign states and dependent territories with 417 inhabitants per square mile. The last population census occurred in 2011 and revealed a total population of 78,115, which means that the number of inhabitants increased by 9.1 percent in a little more than two years. Also, the country’s population has doubled since 1984 and tripled since 1977. According to a 2013 estimate, life expectancy at birth of the total population is of 82.58 years, 80.46 years for males and 84.83 years for females. Birth rate is of 8.88 births/1,000 population, death rate is of 6.67 deaths/1,000 population, while sex ratio is of 1.07 males/female. 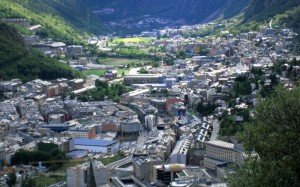 Andorra’s capital and largest city is Andorra la Vella, with a population of 63,574 people and a density of 1,922 inhabitants per square mile. Located at an elevation of 3,356 feet, Andorra la Vella is the highest capital city in Europe. The city’s main industry is tourism, with Andorra la Vella being a popular ski resort and visit by about 10 million people each year. Main tourist attractions include the Esglesia de Sant Esteva (Saint Stephen) church, the Government Exhibition Hall and the plaza outside the parliament building. Also known as a tax haven, the city is the center of many banks and businesses. Andorra has two more cities with populations of more than 10,000 people (but less than 15,000) – Escaldes-Engordany and Encamp. 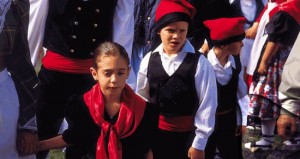 Oddly enough, when compared to other European countries, two-thirds of Principality’s population is made up of citizens without Andorran nationality, with ethnic Andorrans accounting for only 33 percent of the total number of inhabitants. Spanish ethnics account for 23 percent of the population, Portuguese – 21 percent, French – 17 percent, and Arabs (mostly North African immigrants) – 3 percent. The other 3 percent include Italians and Britons. 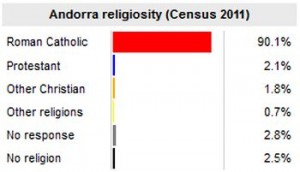 According to the 2011 census, 90 percent of the population are followers of the Roman Catholic Church. Other Christian denominations account for almost 4 percent and include the Anglican Church, the Reunification Church, the New Apostolic Church, and Jehovah’s Witnesses. Other religions, which means about 0.7 percent of the population, include Islam (mostly North African immigrants) and very small communities of Hindu, Baha’i Faith and Judaism believers. 2.5 percent have declared no religion. 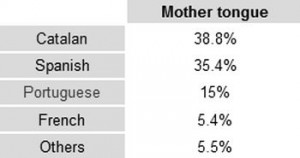 The official language in Andorra is Catalan, a Romance language spoken by almost 10 million people, mostly in Spain, but also in France and Italy. About 38.8 percent of the Andorran population speaks Catalan, while 35.4 of the inhabitants speak Spanish. Portuguese and French are used by 15 percent and 5.4 percent of the country’s citizens respectively. English is mostly used in major tourist resorts. Keen to encourage the use of Catalan, the Andorran government provides free Catalan classes to assist immigrants. 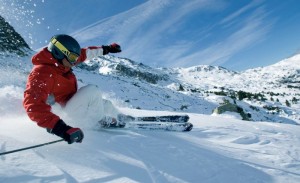 Tourism accounts for about 80 percent of Andorra’s GDP, with about 10 million tourists visiting the country each year. The banking sector, which has a tax haven status, is another major contributor to the economy. Although not a member of the European Union, Andorra enjoys a special relationship with it, being treated as member for trade in manufactured goods. Following the recent European crisis, Andorra introduced a business tax of 10 percent in January 2012 and a sales tax of 2 percent in January 2013. The Andorran government Andorra also announced intentions to legislate for the introduction of an income tax.