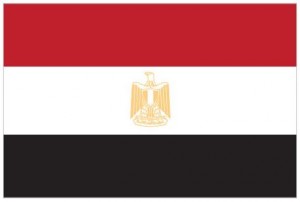 Egypt, mostly known for the pyramids, the Nile and lately by the violent revolutions, is a transcontinental country spanning the northeast corner of Africa and southwest corner of Asia via a land bridge formed by the Sinai Peninsula. With a total area of 387,048 square miles, Egypt is slightly more than three times the size of New Mexico, being the 30th largest country in the world. The 2013 population of Egypt is approximately 85,300,000 people and has a density of 218 inhabitants per square mile, according to a 2013 estimated provided by CIA World Factbook. Among the most populous nations on Earth, Egypt is ranked the 15th. 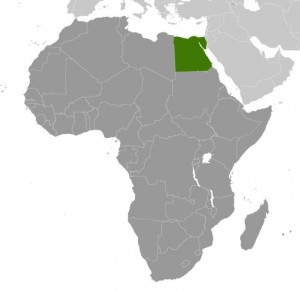 The Arab Republic of Egypt had, until July 7, 2013, a new Constitution, passed by referendum 15-22 December 2012 and signed by the president on 26 December 2012. Due to the latest events in Egypt, the elected president Mohammed Morsi was ousted by the army, who suspended the Constitution. The 2013 revolution comes shortly after the one in 2011, when president Hosni Mubarak was swept from power in a wave of mass protests. The capital and the largest city in Egypt is Cairo, with a population of about 9.1 million people and a density of 44,500 inhabitants per square mile. 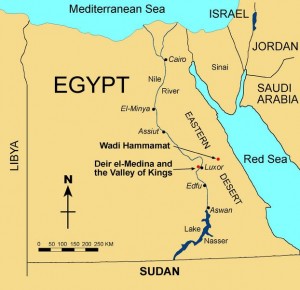 Egypt is situated in Northern Africa, bordering the Mediterranean Sea, between Libya and the Palestinian Gaza Strip, and the Red Sea north of Sudan, and includes the Asian Sinai Peninsula. With a total surface of 387,048 square miles, Egypt is the 30th nation in the world by land mass. One important thing about Egypt is that controls the Sinai Peninsula, the only land bridge between Africa and remainder of Eastern Hemisphere, and the Suez Canal, a sea link between Indian Ocean and Mediterranean Sea. Moreover, Egypt set its dominance of Nile basin issues. By its size and the juxtaposition to Israel, it established its major role in Middle Eastern geopolitics. On the other hand, Egypt is dependent on upstream neighbors and prone to influxes of refugees from Sudan and the Palestinian territories. Egypt has a desert climate, with hot, dry summers and moderate winters. According to these climatic features, Alexandria is the wettest city, Asyut is the driest one, Aswan and Luxor have the hottest summer days, while Saint Catherine has the coldest nights and coldest winters. Divided into 27 administrative areas, which are further divided into regions that contain towns and villages, the terrain of Egypt is a vast desert plateau interrupted by Nile valley and delta. The lowest point in Egypt is Qattara Depression (436 feet), while the highest peak is Mount Catherine (8,625 feet). 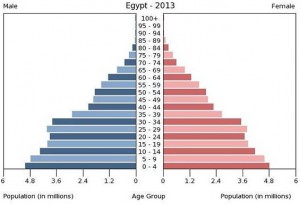 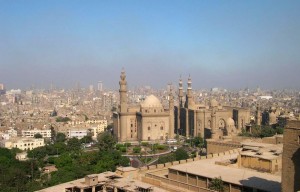 Located near the Nile Delta, Cairo is the capital of Egypt. With a total population of 9,120,350 million people and a density of 44,500 people per square mile, Cairo is not only the largest city in Egypt, but also in the Arab World and Africa. Foreign Policy’s 2010 Global Cities Index ranked the economy of Cairo as the first in the Middles East and the 43rd globally. Because the Islamic architecture is dominant in Cairo, it was nicknamed “the city of a thousand minarets”. The second largest city in Egypt is Alexandria, with a population of 4,546,231 million people, followed by Giza, with 3,628,062 million inhabitants. 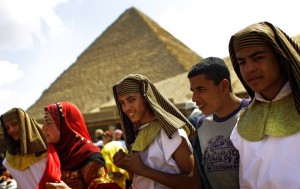 Demographically, Egyptians are divided into those who live in the major urban centers and the fellahin, or farmers that reside in rural villages. The largest ethnic group in Egypt is by far the ethnic Egyptians – 91% of the total population. The other ethnic minorities include Abazas, Turks, Greeks, Bedouin Arab tribes living in the arid eastern deserts and the Sinai Peninsula, the Berber-speaking Siwis (Amazigh) of the Siwa Oasis, and the Nubian communities clustered along the Nile. According to a 1996 census, in Egypt live around 1 million Beja, about 300,000 Nubians, approximately 230,000 Dom and circa 5,000 Berbers. Organization for Migration states that an estimated 2.7 million Egyptians live abroad.: approximately 70% of Egyptian migrants live in Arab countries (923,600 in Saudi Arabia, 332,600 in Libya, 226,850 in Jordan, 190,550 in Kuwait with the rest elsewhere in the region) and the remaining 30% reside mostly in Europe and North America (318,000 in the United States, 110,000 in Canada and 90,000 in Italy). 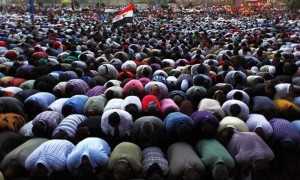 Being a predominantly Sunni Muslim country, the state religion in Egypt is Islam. Also, there are three religions recognized in Egypt: Islam, Christianity and Judaism. 90% of Egyptians are Muslim (mostly Sunni), 9% are Coptic and 1% Christian. Other faiths practiced by Egyptians, such as the small Baha’i and Jehovah’s Witnesses community, are not recognized by the state. 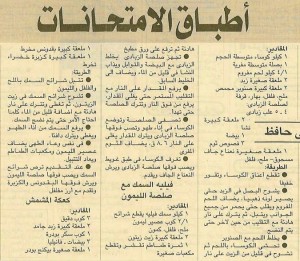 The official language in Egypt is Literary Arabic, used in most written media. Egyptian Arabic, on the other hand, is the commonly spoken language, and is occasionally written in Arabic script or in Arabic chat alphabet mostly on new communication services. However, English is the most common foreign language, while French and German are widely understood and spoken by educated classes. Other languages spoken in Egypt are Bedouin Arabic, Sudanese Arabic, Nubian languages, mainly Nobiin, but also Kenuzi-Dongola, Beja, Domari language and Siwi Berber. 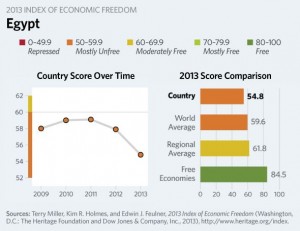 Even though Egypt has the 27th most developed economy globally, living conditions for the average Egyptian remained poor and contributed to public discontent. After unrest erupted in January 2011, the Egyptian Government backtracked on economic reforms, drastically increasing social spending to address public dissatisfaction, but political uncertainty at the same time caused economic growth to slow significantly, reducing the government’s revenues. With a GDP of $537.8 billion, the GDP per capita is no higher than $6,600, maintaining at the same value as for 2011 and for 2010 (2012 estimate). Also, the economic growth in 2012 was of 2%, while in 2011 was of 1.8% and in 2010 of 5.1%. According to a 2005 estimate, 20% of Egyptians live below World Bank’s poverty line.

The population of Egypt in 2013 as published on this page is only an estimate based on 2012projections of the latest census data. As clearer numbers become available in 2014, we will publish them here.