Although a part of the North American continent, the island of Greenland is actually an autonomous country within the Kingdom of Denmark and is politically associated with Europe due to its historical links with Norway and Denmark. Slightly more than three times the size of Texas, Greenland has an area of 836,109 square miles and ranks 12th among the world’s largest countries and autonomous territories and it’s the largest island on Earth. With a population of only 57,714 people, Greenland is the least densely populated country in the world in 2018. 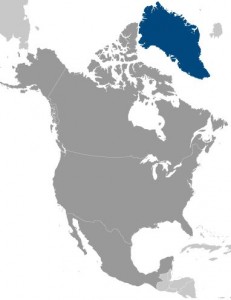 Reportedly inhabited by Arctic people that migrated there from Canada 4,500 years ago, Greenland also became home to Norsemen that settled in the southern part of the territory, beginning with the 10th century. Inuit people arrived in the 13th century, while Norse colonies disappeared in the late 15th century. Ruled by Norway since 1261, Greenland was ceded to Denmark in 1814. It became an administrative division of the Kingdom of Denmark in 1953 and it was granted home rule in 1979. Further autonomy and self rule was established in 2009, after Greenlanders voted to transfer more power from the Danish government to the local Greenlandic government. Since then, the Danish government has retained control of foreign affairs, national defense, the police force, the justice system, and monetary policy. Greenland is now a parliamentary democracy with a constitutional monarchy under the rule of Queen Margrethe II of Denmark.

Because more than 75 percent of its total area is covered by an ice sheet, all towns and settlements of Greenland are situated along the ice-free coast, mainly to the west side of the island. Since 2009, Greenland has been divided into four territories known as “municipalities”: Sermersooq (“Much Ice”), Kujalleq (“South”), Qeqqata (“Centre”), and Qaasuitsup (“Darkness”). The northeastern part of Greenland is not part of any municipality, but is the site of the world’s largest national park – the Northeast Greenland National Park. Also, Greenland is home to the Thule Air Base, an enclave within the Qaaquitsup municipality administered by the United States Air Force. The Greenland ice sheet is almost two miles thick and if it were to melt away completely, the world’s sea level would rise by more than 23 feet. The highest point in Greenland is Gunnbjørn Fjeld at 12,139 feet. 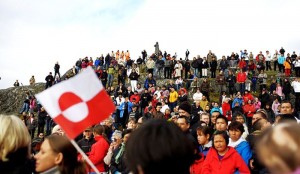 According to an August 2013 estimate (CIA World Factbook), Greenland has a population of only 57,714 people, which makes it the world’s 205th most populous country (out of 239 states and autonomous territories). As for population density, Greenland is the least densely populated country in the world with a density of only 0.069 people per square mile. As of 2013, the population growth rate is at 0.03 percent percent, while birthrate is estimated at 14.57 births per 1,000 people. Life expectancy in Greenland is of 71.54 years, with 68.88 years for males and 74.33 years for females respectively. Sex ratio is rated at 1.11 males/female. About 84 percent of the total population lives in urban areas. 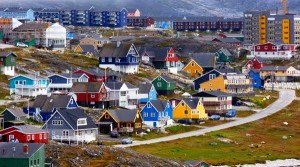 Nuuk is the capital and largest city of Greenland. With a population of about 16,000 people and an area of 265 square miles, Nuuk is one of the smallest capital cities in the world by population. Now the seat of the Greenlandic government, Nuuk is also the country’s largest cultural and economic center. Other important cities in Greenland are Sisimiut, with a population of 5,460 people, and Ilulissat, with 4,606 inhabitants. All the other cities and settlements are home to less than 3,500 people. 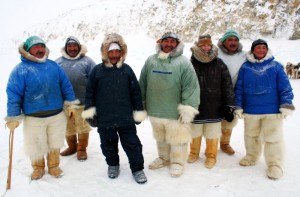 Greenlandic Inuit is the dominant ethnic group of the island and accounts for 88 percent of the total population (including Inuit-Danish mixed). The remaining 12 percent of the inhabitants are of European descent, consisting mainly of Norwegian and Danish people.

Other religions practiced in Greenland are different forms of Christianity and traditional Inuit spiritual beliefs.

The Tunumiisut and Inuktun dialects, which are spoken by about 3,000 and 1,000 people respectively, have been labeled as endangered by UNESCO. About 12 percent of the population speak Danish as their first or only language, many of them filling positions as administrators, professionals, academics, or tradesmen. English is taught in schools.

Greenland’s economy is dependent on fishing and fish exports. The country also depends on a substantial subsidy from the Danish Government which totaled about $650 million in 2012, approximately 56% of government revenues for the year. However, experts predict that Greenland’s economy will be strengthened by increased income from the extraction of natural resources, including hydrocarbon and minerals with new sources of ruby being discovered recently. Greenlandic economic growth is also stimulated by tourism, with increasing numbers of cruise lines operating in Greenland’s western and southern waters during the summer season. In 2012, Greenland had a GDP by purchasing power parity of $2 billion, ranked 169th in the world according to the International Monetary Fund (IMF).

The melting of Greenland’s ice sheet accounts for as much as 40% of the sea level increase in 2019.