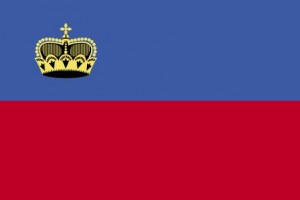 Liechtenstein, officially known as the Principality of Liechtenstein, is a landlocked country in Central Europe, bordered by Switzerland to the west and south and by Austria to the east and north. With an area of only 61 square miles, Liechtenstein is one the smallest countries in the world by land mass – ranked 219th among 249 states and autonomous territories. Liechtenstein is also one the least populous countries on Earth, being home to only 37,000 inhabitants (ranked 213th globally). Schaan is Liechtenstein’s largest city by population, while Vaduz is the capital and seat of the national parliament. 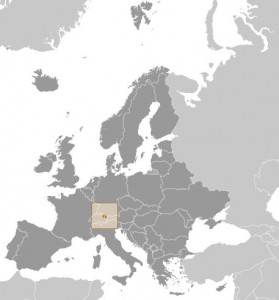 The country takes its name from the Liechtenstein dynasty, which comes from Castle Liechtenstein in Lower Austria. The castle was possessed by the family from at least 1140 until the 13th century, and from 1807 onward. Liechtenstein became a sovereign member state of the Holy Roman Empire in 1719 and then part of the Confederation of the Rhine in 1806, after the Roman Empire was dissolved as a result of the Napoleonic Wars. In 1866, Liechtenstein gained independence from the German Confederation, but remained closely tied to the Austrian Empire and later to Austria-Hungary. The country faced financial troubles after World War II, but prospered during the decades that followed. Present day Liechtenstein’s population enjoys one of the world’s highest standards of living. The unitary parliamentary constitutional principality is ruled by Prince Hans-Adam II, the world’s sixth wealthiest leader with an estimated wealth of $5 billion.

Located in the Upper Rhine valley of the European Alps, Liechtenstein is bordered by Austria to the east and north and by Switzerland to the south and west. Its territory has an area of only 61 miles, which makes it the sixth-smallest independent nation in the world by land area. For the record, the country is about 15 miles long measured from south to north and its total land boundaries are only 48.4 miles long. Liechtenstein is divided into 11 communes that mostly consist only of a single town or village. The terrain is mostly mountainous, with the highest point, Grauspitz, measuring 8,527 feet. The country has a continental climate with cold winters and moderately warm and humid summers.

Liechtenstein has a total 2013 population of 37,009 people and a density of 606 inhabitants per square mile, according to an estimate provided by the CIA World Factbook, being the 213th most populated nation in the world and the fourth smallest country of Europe, after the Vatican City, Monaco, and San Marino. The last population census took place in 2000 and revealed that the country was inhabited by 33,307 people. At the time of writing, the population growth rate is 0.81%, while life expectancy at birth of the total population is of 81.59 years – 79.45 years for males and 84.29 years for females. Birthrate is of 10.67 births/1,000 population, death rate is of only 6.89 deaths/1,000 population, and sex ratio of the total population is of 0.98 male(s)/female. 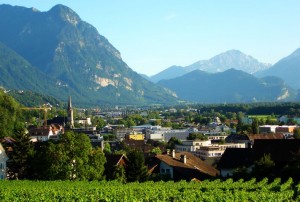 The largest city in Liechtenstein is the municipality of Schaan. Located just north of capital city Vaduz, Schaan has a population of 5,758 people and an area of 10.3 square miles. Home to the headquarters of Ivoclar Vivadent AG, the world’s biggest manufacturer of false teeth, and Hilti Aktiengesellschaft, one of the world’s largest makers of anchors and power tools, Schaan also includes the Naaflopf, one of the two tripoints between Liechtenstein, Switzerland and Austria. The nation’s second largest city is capital Vaduz, with a population of 5,342 inhabitants and a total area of 6.7 square miles. Vaduz is the seat of the national parliament and includes Vaduz Castle, the home of the reigning prince of Liechtenstein and the Liechtenstein princely family, as its most important landmark. Other large cities in Liechtenstein are Triesen (4,643 people), Balzers (4,436 people) and Eschen (4,076 people).

Alemannic Germans make out 86 percent of the country’s total population, while the other 14 percent include large numbers of ethnic Italians and ethnic Turks. However, about one third of its inhabitants are said to be foreign-born, mainly from Germany, Austria and Switzerland, with 65.6 percent of the people being referred to as Liechtensteiners. 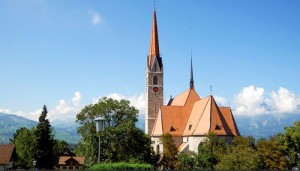 Christianity is the dominant religion in Liechtenstein, with 76.2 percent of the population being followers of Roman Catholicism, which is the country’s official religion. About 7 percent are Protestants, 1.1 percent Christian Orthodox, 4.8 percent Muslims and 0.1 percent Jews. 0.3 percent believe in other religions, while 7 percent have declined to declare or have declared no religion at the last census. Almost 100 Jehovah’s Witnesses worship in Liechtenstein. 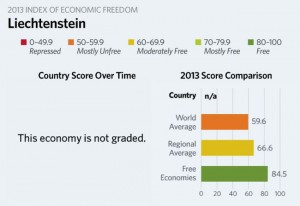 Despite its small size and limited natural resources, Liechtenstein has developed into a prosperous economy and has the second highest per capita income in the world ($141,100). Because of its very low business taxes, Liechtenstein is one of the few countries in the world with more registered companies than citizens. Part of a customs union with Switzerland, Liechtenstein employs the Swiss franc as national currency and is a member of the European Economic Area since May 1995. In 2011, the Principality, albeit not a member of the European Union, joined the Schengen Area, which allows passport-free travel across 26 European countries. Liechtenstein imports about 85 percent of its energy, but at the same time is a large producer of ceramics and is the world’s largest producer of sausage casings and false teeth.