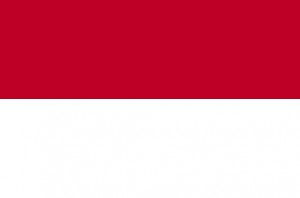 Monaco, officially the Principality of Monaco, is a sovereign city-state located on the French Riviera in Western Europe. Bordered by France and by the Mediterranean Sea, Monaco has an area of only 0.78 square miles and a 2013 population of 30,500 inhabitants, making it the second smallest country in the world after Vatican City. Monaco’s so called capital city is Monte Carlo. Officially known as a Quarter (Quartier), Monte Carlo has an area of 0.2 square miles and a population of about 15,000.

The history of Monaco begins in the 6th century BC, when the Phocaeans of Massalia founded the colony of Monoikos, from which it draws its name. Monaco became a colony of the Republic of Genoa in 1215 and in 1297 it came under the rule of the House of Grimaldi. Monaco was purchased from the crown of Aragon in 1419 by the Grimaldis, who became vassals of the French kings starting in 1642. The principality continued its existence as a protectorate of France until the French Revolution, when revolutionary forces captured Monaco. The state remained under French control until 1814, when the Grimaldis returned to the throne.

Monaco became a French protectorate once again in 1860, but declared its independence shortly after. However, in July 1918, the Franco-Monegasque Treaty provided for limited French protection over Monaco. Monaco remained neutral during World War II but drew extraordinary interest from both Italy and Germany. Despite the fact that Prince Louis II had been reared in Germany, was fluent in its language and very well connect with the German ruling class, Monaco was invaded and occupied by the Italian army in 1943 at the direct orders of Benito Mussolini. Adolf Hitler was indignant at this development and demanded that he retreat, directly leading to the occupation by Nazi Germany who possessed a distinct interest in establishing their own banking and business interests there. Monaco was ruled by Prince Rainier III from 1949 through 2005, when he was succeeded by Albert II. Present day Monaco is a unitary constitutional principality ruled by Sovereign Prince Albert II of Monaco, and Minister of State Michel Roger. 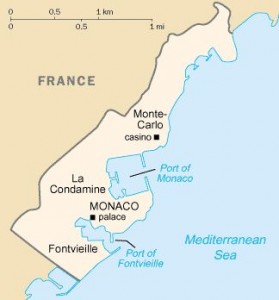 Located on the French Riviera, bordered by France on three sides and the Mediterranean Sea on one side, the city state of Monaco has an area of only 0.78 square miles (500 acres), making it the world’s second smallest nation behind Vatican City. Despite its reduced surface area, the Principality of Monaco is organized in four traditional Quarters and 10 Wards. The country has a land border of only 2.7 miles (with France) and a coastline of 2.5 miles. The lowest point in the country is the Mediterranean Sea (sea level), while the highest point is Chemin des Revoires at just 528 feet. Monaco has a warm Mediterranean climate, which is influenced by both the oceanic climate and the humid subtropical climate, and has warm, dry summers and mild, rainy winters. 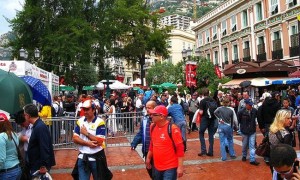 According to a September 2013 estimate provided by the CIA World Factbook, Monaco has a population of 30,500 inhabitants and ranks 217th among the world’s 239 countries and sovereign territories by population. On the other hand, Monaco is the world’s second most densely populated countries (behind Macau) with 39,102 people per square mile. As of 2013, the country’s birth rate is of only 6.79 births/1,000 population, while life expectancy at birth of the total population is estimated at 89.63 years – 85.7 for males and 93.71 for females. Sex ratio is rated at 0.95 males per female. About 64 percent of the total population lives in urban areas.

The last census in Monaco occurred in 2008 and revealed a population of 35,352, which means that the total population has gone down 13.7 percent the past five years. 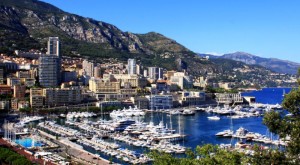 Often referred to as the capital of Monaco, Monte Carlo is the official administrative Quartier (Quarter) of the Principality. Total population of the municipality is of 15,200 people, while the ward itself is home to about 3,500 inhabitants. Monte Carlo is the site of several famed tourist attractions, including the Monte Carlo Casino,  the Hotel de Paris, the Café de Paris, and the Salle Garnier. Monte Carlo is also home to a number of celebrities, including Jenson Button, Bono (U2), David Coulthard, Novak Djokovic, Mohamed Al-Fayed, Lewis Hamilton, Gina Lollobrigida, Roger Moore, Mike Oldfield, Keke Rosberg, Nico Rosberg, Ringo Starr and Caroline Wozniacki. 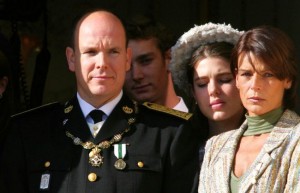 The 2008 census revealed that the native Monegasques (people born in Monaco) are a minority in their own country, accounting for only 21.6 percent of the population. At that time, French nationals were the largest group in the Principality, with 28.4 percent.  Italians represented 18.7%, British – 7.5%, Belgian – 2.8%, German – 2.5%, Swiss – 2.5% and United States nationals 1.2%. However, the CIA World Factbook states that 47 percent of Monaco’s citizens are French, while 16 percent are Monegasque, 16 percent Italian, while 21 percent are of other ethnics. 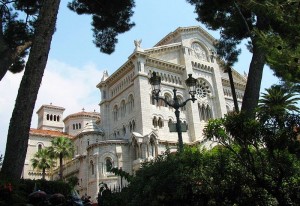 The official religion in Monaco is Roman Catholicism, with Christian comprising about 83 percent of the country’s total population. Other religions include Judaism (2.9 percent) and Islam (0.8), while almost 13 percent of the population have declared no religion at all. There are five Roman Catholic parish churches in Monaco and one cathedral, which is the seat of the archbishop of Monaco. Freedom of religion is guaranteed by the constitution. 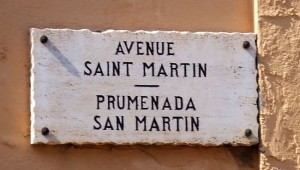 French is the official language in the Principality of Monaco, while Italian is spoken by an important part of the population. Monegasque, the traditional language in Monaco (similar to Ligurian – spoken in Genoa, Italy), is now spoken by only a small number of residents and is considered an endangered language as it is not being taught to new speakers. English is also used in the country, mainly by American, British, Canadian, and Irish residents. In the Monaco-Ville quarter, street signs are printed in both French and Monegasque. 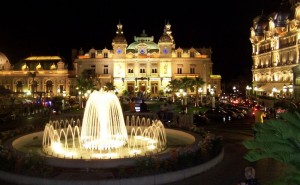 Since it has no income tax and low business taxes, Monaco thrives as a tax haven both for individuals who have established residence and for foreign companies that have set up businesses and offices. However, Monaco is not a tax-free country and charges nearly 20% value-added tax, while companies face a 33% tax on profits unless they prove that three-quarters of their profits are generated within the principality. Living standards in Monaco are high, despite the fact that recent weak economic growth has deteriorated public finances as the principality recorded a budget deficit of 1.3% of GDP in 2012.