Seychelles, officially the Republic of Seychelles, is a small country in the Indian Ocean. Located about 932 miles east of mainland Africa and northeast of Madagascar, Seychelles is actually an archipelago consisting of 115 islands. Its territory measures only 174 square miles, which makes it one of the world’s smallest nations – ranked 199th. Population-wise, Seychelles is home to almost 91,000 inhabitants, making it the Earth’s 198th most populous state. Seychelles has a coastline of 305 miles and its capital and current largest city is Victoria (about 27,000 people). 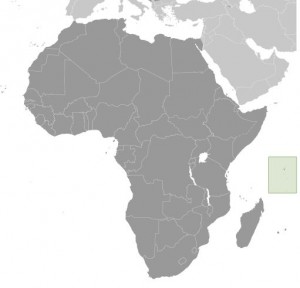 The first people to arrive in the uninhabited archipelago of Seychelles are said to have been Austronesian seafarers and later Maldivian and Arab traders. European presence in the islands has been recorded starting 1502, when Portuguese Admiral Vasco da Gama passed through the region. The islands were also used by pirates, as they were a transit point for trade between Asia and Africa. Under French control since 1756, the islands came under British order in 1810 and became a crown colony at the beginning of the 20th century (1903).

Seychelles gained independence as a republic within the Commonwealth in 1976, but the country’s first president was ousted a year later, during a coup d’etat. Seychelles became a socialist one-party state after the 1979 constitution was established and until 1991. Since 1993, when a new constitution was approved, Seychelles is a unitary representative presidential republic. At the time of writing, Seychelles is ruled by President James Michel and Vice-President Danny Faure. The country is now part of the Indian Ocean Commission (IOC), the Commonwealth of Nations, and the Organisation Internationale de la Francophonie (OIF). 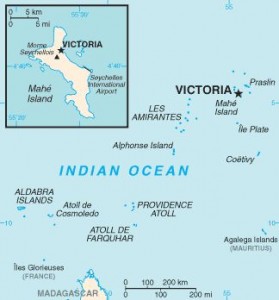 Located in the Indian Ocean – about 932 miles east of mainland Africa and northeast of Madagascar – Seychelles is an archipelago consisting of 115 islands. It has an area of 174 square miles – 2.5 times the size of Washington, DC – and ranks 199th among the world’s largest nations by land mass. Seychelles is divided into twenty-five administrative regions that comprise all of the inner islands. Known as the Greater Victoria, eight of the districts make up the capital of Seychelles, while another 14 districts are considered the rural part of the main island of Mahe. The Outer Islands, a coral formation of islands that’s not on the shallow Seychelles Bank, are not considered part of any district.

Seychelles has a humid climate that’s classified as part of the tropical rain forest. Temperature varies little throughout the year – from 75 to 86 degrees Fahrenheit. March and April are the hottest months, while May to November is more pleasant with southeast trade winds. High winds are rare as most of the islands are located outside the cyclone belt. However, a tropical cyclone caused torrential rain, flooding and landslides that destroyed hundreds of houses in January 2013. 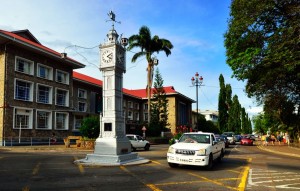 The CIA World Factbook’s July 2013 estimate says Seychelles has a total current population of 90,846 inhabitants and a density of 522 people per square miles, which makes it one of the world’s smallest nation by population – ranked 198th. Seychelles was inhabited by about 36,000 people in 1950 and around 45,000 in 1963, which means total population in the islands has doubled in 50 years. About 90 percent of the people live on the main island of Mahe, while most of the rest live on Praslin and La Digue. The remaining smaller islands are either sparsely populated or uninhabited. As of, the Republic of Seychelles has a population growth rate of 0.9 percent and a birthrate of 14.85 births/1,000 population. Life expectancy is rated at only 69.4 years for males and 78.76 years for females, which means a population total of 74 years. Sex ratio is estimated at 1.04 males/female, while net migration rate is 1 migrants/1,000 population. 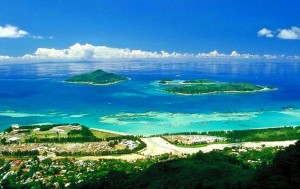 The capital and largest city in Seychelles is Victoria. Sometimes referred to as Port Victoria, the city is is located on the north-eastern side of Mahe island and is home to about 26,000 people, more than a quarter of the country’s total population. Served by an international airport since 1971, Victoria’s main attractions Vauxhall Clock Tower replica, the Courthouse, the Botanical Gardens, the National Museum of History, and the Sir Selwyn Selwyn-Clarke Market. Seychelles’ next major cities (with population a little over 4,000) are Anse Boileau, Bel Ombre and Beau Vallon. 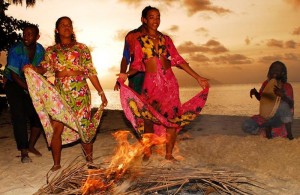 Being populated by immigrants who have arrived in the islands the past 300 to 400 years, Seychelles has various mixed French, African, Indian, Chinese and Arab ethnic groups that account for about 70 percent of the total population. Indo-Seychellois, or descendents of Indians that arrived on the islands as slaves, represent about six percent of the population. 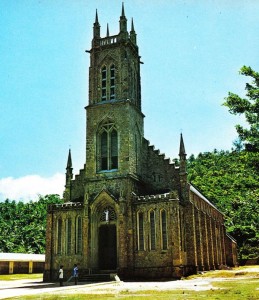 According to the 2002 census, the dominant religion in Seychelles is Christianity, with over 82 percent being counted as Roman Catholic, 6.4 percent are Anglican, while 4.5 percent are of other Christian denominations. Additional religions include Hindu (2.1%), Muslim (1.1%), other non-Christian faiths (1.5%), unspecified religion (1.5%) and no religion (0.6%). A small perecentage of the Seychellois people still believe in an ancient spiritistic religion called Ahrjuje. According to the 2013 Yearbook of Jehovah’s Witnesses, about 340 of their members practice their religion in the Seychelles which is known for religious freedom.

The Seychelles constitution recognizes no less than three official languages – Seychellois Creole, French, English. Seychellois Creole, a French-based creole language also known as Kreol and Seselwa, is the most commonly spoken language in the archipelago, being spoken natively by about 95 percent of the population. Because Seychelles was a British for 166 years (until the 1976), English has remained the main language used in business and by government officials. The French language was introduced before the British rule and has survived thanks to the privileged position of neutrality the French minority benefited from under the Crown. 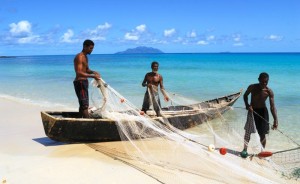 As with most archipelago nations, tourism and fishing are the largest economic activities. According to the CIA World Factbook, the tourist sector provides more than 70 percent of hard currency earning and employs about 30 percent of the labor force. Main exports include canned tuna, frozen fish, cinnamon bark, copra and petroleum products to countries such as France, the United Kingdom, Japan and Italy. By GDP over purchasing power parity, Seychelles ranks 188th in the World with $2.35 billion in 2012, while GDP per capita by PPP is at $25,600 – 61st in the world – above Greece, Portugal, Argentina or Russia.