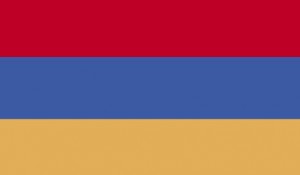 Armenia, officially known as the Republic of Armenia, is a country located in the South Caucasus region of Eurasia, at the crossroads of Western Asia and Eastern Europe. Slightly smaller than Maryland, Armenia has a total area of 11,484 square miles and ranks 141st among the World’s states by land mass. With a population of almost 3,000,000 people, Armenia is the 138th most populous country on Earth. Its capital and largest city is Yerevan, which has about 1.2 million inhabitants. 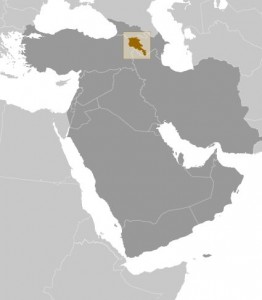 Located in the highlands that surround the bliblical mountains of Ararat, Armenia was somewhat established as a nation back in 2492 BC, even though there is evidence of an early civilization in Armenia dating to about 4000 BC. Known as the Kingdom of Armenia since 190 BC, the territory became a democratic republic in 1918, but was annexed by the Soviet Union four years later. The Armenian Soviet Socialist Republic ceased to exist in August 1990, when Armenia declared its independence (recognized only in 1991, when the Soviet Union was dissolved).

The territory is internationally recognized as part of Azerbaijan, but the Baku government has not exercised power over most of the region since 1991. Armenia and Azerbaijan have been holding peace talks mediated by the OSCE Minsk Group on the region’s disputed status since the 1994 ceasefire was agreed upon. 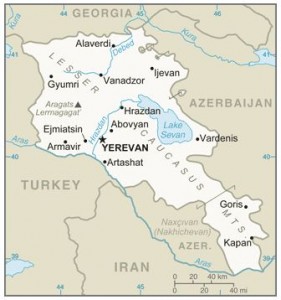 Located between Western Asia and Eastern Europe, Armenia has a total area of 11,484 square miles and is the World’s 141st largest state by land mass. Bordered by Turkey, Iran, Georgia and Azerbaijan, Armenia has 779 miles of land boundaries. The republic is divided into ten provinces, with the city of Yerevan having special administrative status as the country’s capital. Armenia has a highland continental climate, with hot summers and cold winters. No point in Armenia is below 1,280 feet above sea level, while the highest point is located at Mount Aragats, which has 13,419 feet. Now located in Turkey, Mount Ararat is regarded as Armenia’s most important symbol, being used on the country’s national emblem. As late as 2010 a group of researchers from Hong Kong and Turkey have boasted of finding Noah’s Ark on Mt. Ararat. 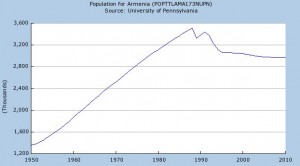 In accordance with a August 2013 estimate provided by the CIA World Factbook, Armenia is home to 2,974,184 inhabitants, which translates into a density of 259 people per square mile. By population, Armenia is the World’s 138th most populous country. The last demographic census occurred in 2011 and revealed a population of 3,268,000 people, which means that Armenia’s population dropped by about 9 percent. Armenia’s population reached its peak in 1991, when about 3.6 million inhabitants were living in the newly-proclaimed independent republic. As of 2013, the country’s growth rate is estimated at only 0.14%, while birth rate is of 12.86 births/1,000 population. Life expectancy at birth of the total population is estimated at 73.75 years – 70.1 for males and 77.8 for females. Sex ratio is rated at 0.89 males per eachfemale. About 64 percent of the total population lives in urban areas. 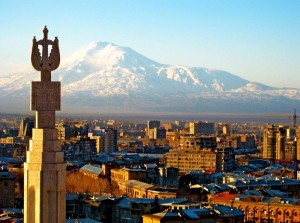 Home to 1.2 million people, Yerevan is the capital and largest city in Armenia. Yerevan is an ancient city but has been the country’s capital only since 1918. The city has an area of 88 square miles and is divided into twelve administrative districts. Present day Yerevan is Armenia’s main cultural, artistic, and industrial center. The city is also known for its historical sites, including Garni Temple, Zvartnots Cathedral, and Khor Virap. Besides Yerevan, Armenia has only two cities that have a population of more than 100,000 people: Gyumri (pop: 146,400) and Vanadzor (pop: 104,800). 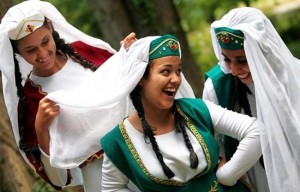 Armenians make up the country’s main ethnic group, which account for 97.9 percent of the population. Yazidis comprise 1.3 percent, while Russians constitute 0.5 percent of the populations. Other minority groups include Assyrians, Ukrainians, Greeks, Kurds, Georgians, and Belarusians. Smaller communities of Vlachs, Mordvins, Ossetians, Udis, and Tats are also known to live within the Armenian borders. Before becoming independent, Armenia was also home to an important community of Azerbaijani people (about 2.5 percent of the total population), but virtually all of them emigrated to Azerbaijan due to the Nagorno-Karabakh war. 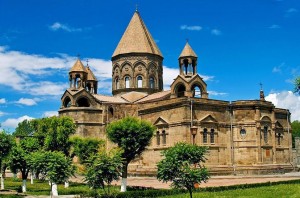 It’s believed that Armenia was the first nation to adopt Christianity as a state religion back in the year 301. More than 98 percent of Armenians are followers of the Christian Church, with about 94 percent belonging to the Armenian Apostolic Church, a very ritualistic and conservative church. Other Christians, such as Baptists, Presbyterians and Catholics account for about 4 percent of the total population. The Yazidis follow the ancient Yazidi religion (1.3 percent), while very few people also practice Sunni Islam, Bahai Faith, Neopaganism and Judaism. 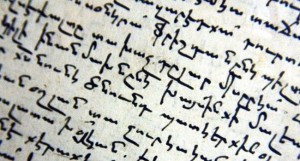 Spoken by almost 98 percent of the total population, Armenian is the only official language in Armenia. Russian is used as a native tongue by about 1 percent of Armenia’s inhabitants, but the language is widely used throughout the country, especially in education. According to Gallup.com, 94 percent of adult Armenians consider it important that their children learn Russian. Yazidi is spoken by 1 percent of the population, while 0.4 percent of the people speak other languages, including Ukrainian, Greek, Kurdish, Georgian, and Belarusian. 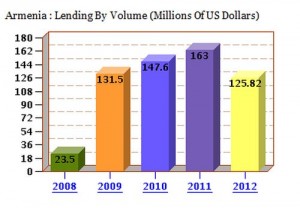 Until gaining its independence from the Soviet Union, Armenia’s economy was based largely on industry—chemicals, machinery, processed food, synthetic rubber and textiles, and it was highly dependent on outside resources. The country still relies on imported fuel, including gas and nuclear fuel, from Russia for its energy sector and continues to suffer from the Soviet legacy of a centrally planned economy. In 2012, Armenia had a GDP by purchasing power parity of $19.97 billion – ranked 131st in comparison to the world – and a GDP by official exchange rated of $10.07 billion. GDP per capita in 2012 was of $5,900 – ranked 152nd in the world – similar to country’s such as Swaziland and Georgia. Armenia’s long term goals include additional economic reforms, the strengthening of the rule of law in order to regain economic growth, and improve economic competitiveness and employment opportunities.