Bangladesh, officially known as the People’s Republic of Bangladesh, is a sovereign state located in South Asia. The country has a total surface of 56,977 miles (slightly smaller than the state of Iowa), which makes it the world’s 94th largest state by area. In 2013, Bangladesh has an estimated population of about 163 million and a density of about almost 2,700 people per square mile. Bordered by India and Burma (Myanmar), the country’s total land boundaries measure 2,638 miles. With a population of 15.3 million (2011 census), Dhaka, also the capital city, is the largest metropolitan area in Bangladesh. The country’s currency is Taka.

The People’s Republic of Bangladesh declared its independence from Pakistan on March 26, 1971. The new status was recognized on December 16 the same year and the current constitution was established on November 4, 1972. Since then, the country was the subject of two military coups, in 1975 and 1981, both leading to the assassination of country leaders. Starting 2007, when a major anti-corruption movement was born, more than 160 person were arrested on corruption charges, including politicians, civil servants and businessmen, among whom were both major party leaders. At the time of writing, the Government is formed by a unitary parliamentary democracy led by president Adbul Hamid. Bangladesh is a founding member of the South Asian Association for Regional Cooperation (SAARC), a member of the Commonwealth of Nations, and the world’s largest contributor to United Nations peacekeeping missions. Bangladesh subsequently joined the United Nations in 1974.

Located in South Asia and bordered by India and Burma, Bangladesh has a total area of 56,977 square miles (147,570 square kilometers), being the world’s 94th largest country by surface. The present-day borders of Bangladesh were established during the partition of the British Indian Empire in 1947, when eastern Bengal became part of the newly formed State of Pakistan. The country is divided into seven administrative divisions. While most parts of Bangladesh are less than 39.4 feet above the sea level, the country’s highest peak, Saka Haphong, measures 3,451 feet. The climate is tropical with a mild winter from October to March, and a humid summer from March to June. Bangladesh is among the countries most prone to natural floods, tornadoes and cyclones and suffered two major natural disasters the past 25 years. In 1991, a cyclone killed about 140,000 people, while the 1998 flood killed 1,000 and left 30 million homeless. 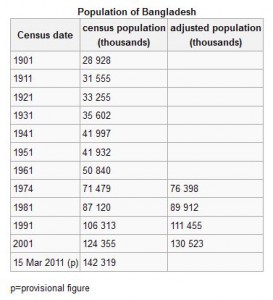 The 2011 census revealed a total population of 142.3 million, but the figure, which was much less than other recent results, has been disputed by the United Nations. According to a July 2013 estimate provided by the CIA World Factbook, Bangladesh is home to 163,654,860 people, which makes it the world’s 8th most populous country. According to the World Bank, the population doubled since 1980, when it was estimated at 80.6 million. The country’s population is projected to surpass 194 million people by 2050. As of 2013, the population growth rate is 1.59 percent, while birthrate is estimated at 22.07 births/1,000 population. Life expectancy in Bangladesh is 70.36 years (68.48 years for males and 72.31 years for females respectively) and sex ratio is rated at 0.95 males/female. Net migration rate is estimated at -0.52 migrants/1,000 population in 2013. 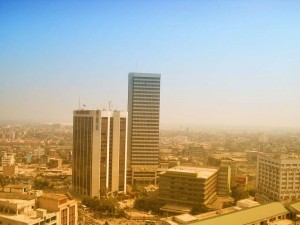 Home to 15,391 million people, according to the 2011 census, Dhaka is the country’s largest city. Established as a city in 1947, Dhaka has a density of about 70,000 people per square mile (28,000 per square kilometer). Dhaka is also the 9th largest city in the world and of the most densely populated metropolitan areas. Although it suffers from poverty, pollution and overpopulation, Dhaka has emerged as one of the fastest growing cities in the world. The next largest cities in Bangladesh are Chittagong (pop: 4.816 million) Khulna (pop: 1.636 million) and Rajshahi (pop: 853,000). 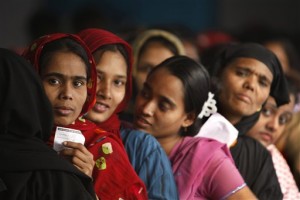 The Bangladeshi population consists of about 98 percent ethnic Bengali, while the remaining 2 percent include various tribal groups. According to Wikipedia, Bengali are a hybrid race which have primarily evolved by mixture of Indo-Aryan race and Tibeto-Burman races, and by Dravidian race in some content. 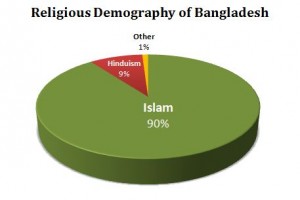 The largest religion in Bangladesh is Islam, with 89.5 percent of the population following the muslim doctrine. Hindus account for 9.6 percent of the population, while the remaining 0.9 percent are Buddhists, Christians and Animists. Bangladesh is the world’s fourth largest Muslim populated state after Indonesia, Pakistan and India. The largest gathering of Muslims in the country is the Bishwa Ijtema, held annually by the Tablighi Jamaat. Dhakeshwari Temple is the biggest Hindu temple in Bangladesh.

More than 98% of the country’s population speak Bengali (also known as Bangla), an Indo-Aryan language of Sanskrit origin with its own script, as their native language. English is used as a second language, mostly among the middle and upper classes, in higher education and in the legal system. Some people, like the Dhakaiyas and the Bihari, speak Urdu, a language associated with the Muslim community of Pakistan and northern India.

Considered a developing nation, Bangladesh was named by Goldman Sachs among the “Next Eleven” having a high potential of becoming the world’s largest economies in the 21st century. Bangladesh has gross domestic product of $269.3 billion in PPP (Purchasing Power Parity) terms and $104.9 billion in nominal terms. The economy has grown at the rate of 6-7% per year over the past few years, with more than half of the GDP being generated by the service sector. However, nearly half of Bangladeshis are employed in the agriculture sector. In 2011, Bangladesh ranked as the 44th largest economy in the world in PPP terms and 57th largest in nominal terms.

Please visit us soon as we’ll be posting what the population of Bangladesh in 2014 is as soon as that data is published.