Officially known as the Republic of the Union of Myanmar, or simply as Myanmar, Burma is a sovereign state located in Southeast Asia. Bordered by China, Thailand, India, Laos and Bangladesh, Burma has a total perimeter of 3,651 miles, including a 1,199-mile long coastline. Slightly smaller than the state of Texas, Burma has a total area of 261,227 square miles, which makes it the world’s 40th largest country by surface. As of July 2013, Burma has an estimated population of about 55,000,000 and a density of about 211 people per square mile. Rangoon (Yangon City) is Burma’s largest city with a population of 4,300,00 inhabitants (2012).

Ruled by three dynasties since 849, Burma was colonized by Britain following three Anglo-Burmese wars which took place from 1824 through 1885. Burma became an independent republic (the Union of Burma) on January 4, 1948. Since the coup d’etat of 1962, the country has been under military control with its population being subjected to systematic human rights violations, including genocide, systematic rape, child labor, slavery, human trafficking and a lack of freedom of speech. Aung San Suu Kyi, Burma’s most prominent human rights activist, was held under house arrest for almost 15 of the 21 years from July 20, 1989 until her most recent release on November 13, 2010. She is  one of the world’s most prominent political prisoners. The country’s current president, Thein Sein, assumed office on March 30, 2011. Myanmar is a member of the Association of Southeast Asian Nations (ASEAN) since 1997. On November 19, 2012, Barack Obama became the first American president to visit Burma.

The country continues to be known under three names. Burma is used in English by the governments of many countries, including the United Kingdom and Canada. The United States uses both Myanmar and Burma, while the United Nations, the Association of Southeast Asian Nations, Russia, Germany, Norway, China, India, Australia and Japan use Myanmar. In countries such as Spain, Italy and Romania, Myanmar is commonly known as Birmania.

Located in Southeast Asia and bordered by China, Thailand, India, Laos and Bangladesh, Burma has an area of 261,227 square miles (676,578 square kilometers) and it’s the world’s 40th largest country by surface. Myanmar is also the largest country in mainland Southeast Asia. Burma is divided into 14 administrative states and regions, which are subdivided into 63 districts. With much of the country located between the Tropic of Cancer and the Equator, climate varies depending on elevation and consists of subtropical temperate climate, temperate, cool, alpine and Arctic climate. 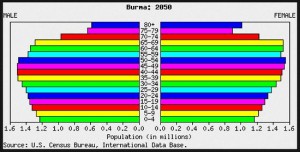 According to a July 2014 estimate provided by the CIA World Factbook, Burma is home to 55,167,330 people, which makes it the world’s 24th most populous country. Population figures are rough estimates because the last official census was taken in 1983, when a population of 33,234,000 was reported. Estimated density as of 2015 is about 211 people per square mile, one of the lowest in Southeast Asia. There are over 600,000 registered migrant workers from Burma in Thailand, and millions more work illegally. Some other 300,000 refugees are located in camps along the Thai-Burma border, while over 55,000 Burmese refugees have been resettled in the United States since 2006. Burma’s population growth rate is estimated at 1.05 percent per year, while birth rate is 18.89 births/1,000 population. Life expectancy is about 65.6 years (63.24 years for males and 68.09 years for females respectively) and sex ratio is estimated at 0.99 males/female. 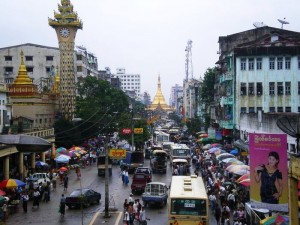 Rangoon, the largest city in Burma

Rangoon (Yangon City) is Myanmar’s largest city and has an estimated population of 4.35 million according to a 2010 United Nations estimate. However, a 2009 US State Department estimate says Rangoon is home to 5.5 million people. The city’s estimated density is rated at 19,000 people per square mile (7,300 people/square kilometer). Rangoon became the capital of Burma on January 4, 1948, when the country regained independence from the British Empire, but lost its status in November 2005, when the military government designated Naypyidaw as the new administrative capital. Myanmar’s second largest city is Mandalay, with a population of 1.2 million, while capital city Naypyidaw is the countries this most populous city with 925,000 inhabitants. Besides Mawlamyaing, which is home to 451,000 people, the other cities have less than 250,000 inhabitants. Capital city Naypyidaw has an area of 2,723 square miles and a density of 340 people per square miles. 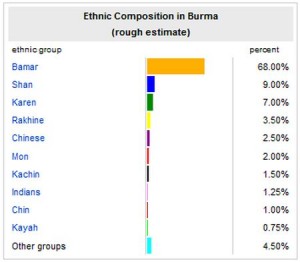 Known as an ethnically diverse country, Burma is home to 135 distinct ethnic groups, all of which are recognized by the government. The Bamar group is the largest in Myanmar with an estimated 68 percent of the population. The other major ethnic groups are Shan (9 percent), Karen (7 percent), Rakhine (3.5 percent), Chinese (2.5 percent), Mon (2 percent), Kachin (1.5 percent), Indians (1.25 percent) and Chin (1 percent).

An overwhelming majority of 89 percent practice Buddhism in Burma, while 4 percent embrace Islamism, 4 percent Christianity, while the other 3 percent are members of several religious groups, including Hinduism and Animism. However, Christian and Muslim populations face religious persecution and find it hard to join the army or get government jobs in the country. Independent estimates claim that Muslim population is actually between 6 and 10 percent of Myanmar’s total population.

Burmese is the mother tongue of the Bamar population (68 percent) and the official language of Burma. Burmese is related to Tibetan and to the Chinese languages. A wide variety of languages are also spoken in Myanmar, especially by ethnic minorities. Other major languages spoken in Burma include Shan (5.8%), Karen dialects (4.7%), Rohingya (1.8%) Kachin (1.6%), Chin dialect (1.4%), Mon (1.3%) and Rakhine (Burmese dialect, 1.3%).

Although rich in precious stones, oil, natural gas, and other mineral resources, Myanmar is one of poorest nations in Southeast Asia due to decades of stagnation and isolation. The country lacks adequate infrastructure and only 25 percent of the population has electricity. Burma had a GDP (by purchasing power parity) of $90.93 billion in 2012, while GDP per capita (PPP) was estimated at $1,400. The country exports natural gas, wood products, pulses, beans, fish, rice, clothing, jade and gems mainly to Thailand, India and China. Burma’s national currency is the Kyat.

We will add current 2016 population of Burma (Myanmar) data and demographics as soon as it becomes available!