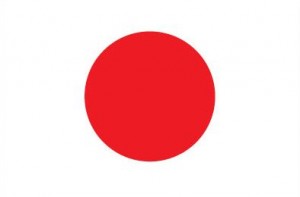 Located in Eastern Asia, between the North Pacific Ocean and the Sea of Japan, Japan is a parliamentary government with a constitutional monarchy. With a total area of 145,925 square miles, Japan is slightly smaller than California. By land mass, it is the 62nd largest country in the world. Japan is home to about 127.2 million people and has a density of 873.1 people per square mile, making it the 10th most populous nation on Earth. The capital and the largest city in Japan is Tokyo. 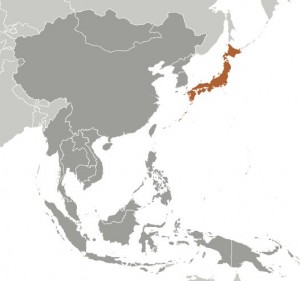 After a civil warfare which lasted for decades, the culture of Japan started developing in 1603 under the rule of the Tokugawa shogunate, a military-led, dynastic government that assured a relative political stability and isolation from foreign influence. During the late 19th and early 20th centuries, Japan became a regional power that was able to defeat the forces of both China and Russia. Being so powerful, it became a conqueror: it occupied Korea, Formosa (Taiwan), and southern Sakhalin Island, between 1931-1932 occupied Manchuria, and in 1937 it launched a full-scale invasion of China.

The most famous attack of Japan remains the one from the World War II. On 7 December 1941, Japan attacked the US naval base at Pearl Harbor and declared war, triggering America’s entry into World War II. Soon, it occupied much of East and Southeast Asia. Japan agreed to an unconditional surrender on 15 August 1945, after the Soviet invasion of Manchuria and the atomic bombings of Hiroshima and Nagasaki. After it was defeated in World War II, Japan recovered to become an economic power and an ally of the US. Today, the emperor of Japan, Akihito, retains his throne as a symbol of national unity, while the elected politicians and the prime-minister Shinzō Abe hold the actual decision-making power.

2011 was a hard year for Japan: it was hit by the Great East Japan Earthquake, also known as Tohoku earthquake, with a magnitude of 9.0 (Mw). Among other effects, the earthquake was followed by a tsunami which caused the Fukushima Daiichi nuclear disaster. More precisely, there were reported level 7 meltdowns at three reactors in the Fukushima Daiichi Nuclear Power Plant complex and 19.000 people died. On 11th of March, Japan suffered the world’s worst atomic accident since Chernobyl in 1986. 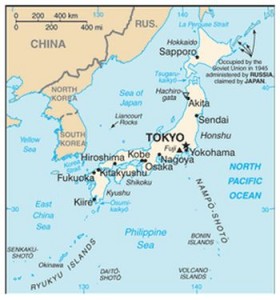 Japan, which literally means “the State of Japan”, is an island nation with a strategic location in northeast Asia and the Pacific Ocean. It borders the Sea of Japan, North Korea, South Korea and Russia to the east and it is stretching from the Sea of Okhotsk in the north to the East China Sea and Taiwan in the south. Being an archipelago of 6,852 islands situated in a volcanic zone on the Pacific Ring of Fire, the total surface of Japan is of 145,925 square miles, being the 62nd largest country in the world. Japan is divided in 47 prefectures and includes Bonin Islands (Ogasawara-gunto), Daito-shoto, Minami-jima, Okino-tori-shima, Ryukyu Islands (Nansei-shoto), and Volcano Islands (Kazan-retto). The terrain is mostly rugged and mountainous, while the climate varies from tropical in south to cool temperate in north. The lowest point in Japan is Hachiro-gata (13 feet), while the highest peak is Mount Fuji (Fujiyama), with 12,388 feet. Japan is a victim of natural hazards due to many dormant and some active volcanoes. There are about 1,500 seismic occurrences (mostly tremors but occasional severe earthquakes) every year. This is why tsunamis and typhoons are common too. Peaks Unzen and Sakura-jima which lies near the densely populated city of Kagoshima, have been deemed “Decade Volcanoes” by the International Association of Volcanology and Chemistry of the Earth’s Interior, worthy of study due to their explosive history and close proximity to human populations. Other notable historically active volcanoes include Asama, Honshu Island’s most active volcano, Aso, Bandai, Fuji, Iwo-Jima, Kikai, Kirishima, Komaga-take, Oshima, Suwanosejima, Tokachi, Yake-dake, and Usu. 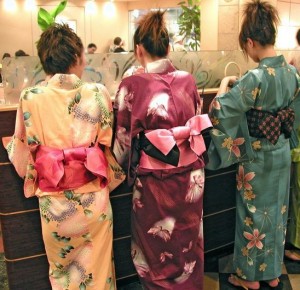 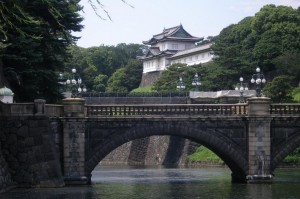 Tokyo is the capital and the largest city in Japan. Often thought of as a city but commonly referred to as a “metropolitan prefecture”, Tokyo is located in the Kanto region on the southeastern side of the main island Honshu and includes the Izu Islands and Ogasawara Islands. With a surface of 5,240 square miles, Tokyo has 23 special wards, 26 cities, 1 district, and 4 sub-prefectures. Also, it has a total population of 35,682,460 and a density of 6,810 inhabitants per square miles. On the other hand, the metropolitan population of Tokyo is of 13,185,502 million people. The next largest city in Japan is Yokohama, situated in Kanagawa province, with 3,689,603 million people, Osaka, from Osaka province, with 2,666,371 million people, and Nagoya, located in Aichi province, with 2,263,907 million people. 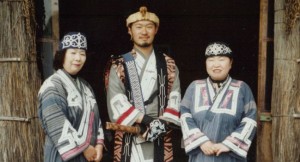 The Japanese society is composed dominantly of Ethnic Japanese – 98.5% and of small communities of foreign workers, such as Koreans – 0.5%, Chinese – 0.4% and others nationalities – 0.6%. Minority groups in Japan consist of Zainichi Koreans, Zainichi Chinese, Filipinos, Brazilians mostly of Japanese descent, and Peruvians mostly of Japanese descent. In 2003, there were about 134,700 non-Latin American Western and 345,500 Latin American expatriates, 274,700 of whom were Brazilians (said to be primarily Japanese descendants, or nikkeijin, along with their spouses. According to CIA, up to 230,000 Brazilians of Japanese origin migrated to Japan in the 1990s to work in industries. In 2004, some of them have returned to Brazil. Yamato is the most dominant native ethnic group in Japan. Other minority groups are indigenous Ainu, Ryukyuan peoples, and Burakumin. 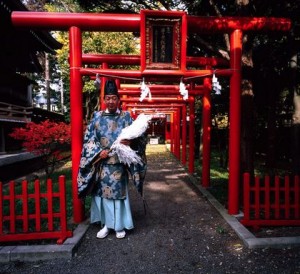 The dominant religion in Japan is Shintoism, practiced by 83.9% of the population, closely followed by Buddhism, practiced by 71.4% of Japanese. The reason why the total adherents exceed 100% is because many people belong to both Shintoism and Buddhism. Moreover, there are also Japanese who are followers of a syncretism of both religions Shintoism and Buddhism. Other important religions followed in Japan are Christianity, with 2% adherents, and other religions – 7.8% adherents. As stated by an estimate, 70-80% of the Japanese answer to polls that they do not consider themselves believers in any religion. In japan there are also minority religions, like Islam, Hinduism, Sikhism, Jehovah’s Witnesses and Judaism. 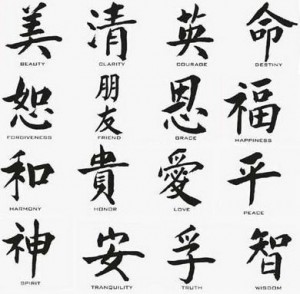 The official and dominant language in Japan is Japanese, an agglutinate language distinguished by a system of honorifics reflecting the hierarchical nature of Japanese society, with verb forms and particular vocabulary indicating the relative status of speaker and listener, spoken by more than 99% of the total population. The Japanese language consists of Chinese, Latin alphabet and Arabic numerals. Other recognized regional languages are Aynu itak, Ryukyuan languages (used in Okinawa), Eastern Japanese, Western Japanese, and several other Japanese dialects. Most public and private schools require students to take courses in both Japanese and English. 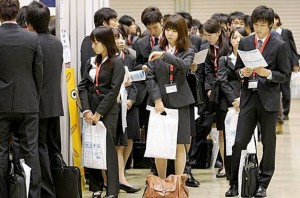 Measured on a purchasing power parity (PPP) basis that adjusts for price differences, Japan in 2012 stood as the fourth-largest economy in the world after second-place China, which surpassed Japan in 2001, and third-place India, which edged out Japan in 2012. The estimated GDP in 2012 was of $5.984 trillion, which makes Japan the 5th most developed economy in the world. The economic growth was of 0.2%, in comparison to 2011, when it reached -0.8% and in comparison to 2010, when it was of 4.5%. Also, the GDP per capita is of $36,200. Still, 16% of the Japanese live below World Bank’s poverty line. The new government from Tokyo will continue a longstanding debate on restructuring the economy and reining in Japan’s huge government debt, which exceeds 200% of GDP. Persistent deflation, reliance on exports to drive growth, and an aging and shrinking population are other major long-term challenges for the economy.

Please visit us again soon as we’ll be posting a 2014 projected population of Japan based on 2012 and 2013 census figures as well as current demographic data and a current Japanese religious map.