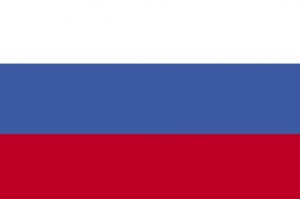 Russia, also officially known as the Russian Federation and formerly part of the Soviet Union, is a country located in northern Eurasia. With a surface of almost 6.6 million square miles (17 million square kilometers) Russia is the largest country in the world, covering more than one-eighth of the Earth’s inhabited land area. The Russian Federation shares land borders with no less than 14 states – Norway, Finland, Estonia, Latvia, Lithuania, Poland, Belarus, Ukraine, Georgia, Azerbaijan, Kazakhstan, China, Mongolia and North Korea – and maritime borders with Japan (by the Sea of Okhotsk) and the United States (Alaska, across the Bering Strait). According to a CIA estimate, the 2013 population of Russia is 142,500,000, making the former soviet giant the world’s ninth most populous nation. Russia’s biggest city is Moscow, with 11.5 million people. It became the capital city of the Russian Soviet Federative Socialist Republic in 1918 and kept its status in the Russian Federation after the Soviet Union was dissolved in 1991.

Russia was established as a medieval state (Kievan Rus’) in 882, while the Grand Duchy of Moscow arose in 1283. It was 1547 when it became a Tsardom, and 1721 when the Russian Empire was proclaimed. Following the Communist Revolution of 1917, towards the end of World War I, Russia became a Soviet Federative Socialist Republic, the world’s first constitutionally socialist state. Since 1922 through 1991 it was part of the Union of Soviet Socialist Republics (USSR), which comprised 14 more states as of 1940: Ukraine, Uzbekistan, Kazakhstan, Belarus, Azerbaijan, Georgia, Armenia, Tajikistan, Moldova, Kirghizstan, Turkmenistan, Lithuania, Latvia and Estonia. 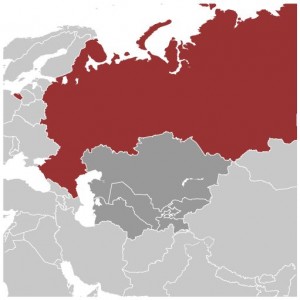 A decisive power during World War II, the Soviet Union fought along with the Allies, including the United States and the United Kingdom. The Russians survived a Nazi Germany invasion and later helped end the European war by capturing Berlin in April 1945. After the war, the Soviet Union occupied Eastern Europe, including East Germany, installing communist governments in what became known as the Eastern Bloc. By establishing the Warsaw Pact alliance, the USSR started a struggle for global domination against the United States and NATO, commonly known as the Cold War. In 1957, Russia triggered the Space Age by launching the world’s first artificial satellite. Four years later, Russian cosmonaut Yuri Gagarin became the first human to orbit the Earth.

Following Stalin’s death, the USSR was led by Nikita Khrushchev, who launched a policy of de-Stalinization. He was succeeded by Leonid Brezhnev who led the Union into an Era of Stagnation. In 1985, new leader Mikhail Gorbachev introduced liberal reforms and restructuring policies through which the Soviet Union became the world’s second largest economy by 1991. However, the Union was dissolved the same year due to political turmoil and strong nationalist and separatist movements. The Russian Federation was instated on December 25, 1991, after Boris Yeltsin was elected in Russia’s first direct presidential election. The country is now led by Vladimir Putin. He was voted as president in 2012, returning to power after four years. The Russian government is a federal semi-presidential constitutional republic. 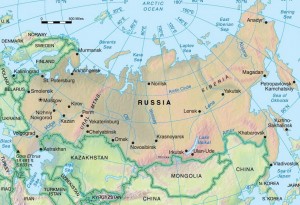 The Russian Federation has a total land area of 6,592,800 square miles (17,098,242 square kilometers) and its the world’s largest country by surface. Russia has a wide natural resource base, include major deposits of oil, natural gas and coal, and is home to 40 UNESCO biosphere reserves, 41 national park and 101 nature reserves. Stretching on almost 5,000 miles east to west, the Russian Federation spans nine time zones and consist of several different landscapes and various climates. Most of Russia consists of vast stretches of plains with steppe to the south and heavily forested areas to the north, while tundra stretches on the northern coast. The Caucasus Mountains found along the southern borders are home to Mount Elbrus, Russia’s highest point at 18,510 ft (5,642 meters).

While most of Northern European Russia and Siberia has a subarctic climate, with extremely cold winters, the coastal part of Krasnodar Krai, possesses a humid subtropical climate with mild winters. The region along the Lower Volga and Caspian Sea coast, as well as some areas of southern Siberia, has a semi-arid climate. Russia also has a polar climate, especially along the shore of the Arctic Ocean and in its Arctic islands. The highest ever temperature recorded in Russia is 113.7 degrees Fahrenheit, while the lowest is minus 71.2 degrees Fahrenheit.

The Russian Federation also possesses a coastline of over 22,991 miles along the Arctic Ocean, the Pacific Oceans, the Baltic Sea, the Sea of Azov, the Black Sea and the Caspian Sea. The country has several islands and archipelagos, including Novaya Zemlya, the Franz Josef Land, the Severnaya Zemlya, the New Siberian Islands, the Wrangel Island, the Kuril Islands, and the Sakhalin. It also controls one of the Diomede Islands (the other belongs to the United States) and the Kunashir Island, which is about 12 miles from Japan. 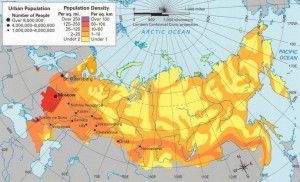 According to a CIA World Factbook estimate for 2013, the Russian Federation is home to 142,500,482 people (a Russian estimated claims a population of 143.4 million), which makes it the planet’s ninth most populous country. Due to its large area, Russia has a density of only 21.5 people per square mile, one of the lowest among the world’s states. In 2013, the population growth rate is negative and estimated at -0.02 percent, while birth rate is 12.11 births/1,000 population. Life expectancy is 69.85 years, with only 64.04 years for males and 76.02 years for females. Russia has a sex ratio of 0.86 males for every female and a net migration rate of 1.69 emigrant(s)/1,000 population. About 10 million illegal immigrants from ex-Soviet countries live in Russia.

The largest city in Russia is Moscow. As of 2013, the capital city is home to 11,514,300 inhabitants (10,799 more people when compared to the 2010 census) and has a density of 11,865 people per square mile. Moscow is a major political, economic and cultural center in Russia and in Europe and has the largest community of billionaires in the world. The city is named after the river on which it’s situated, the Moscow River. Moscow is also the site of the Moscow Kremlin, a former medieval city-fortress and today’s residence of the Russian president. Russia’s second largest city is St. Petersburg with 5,227,567 inhabitants. The next metropolitan areas by population are Novosibirsk (1.47 million), Yekaterinburg (1.35 million), Niznhy Novgorod (1.25 million). 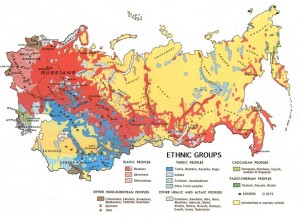 According to the 2010 census, ethnic Russian comprise 81 percent of the country’s total population. However, Russia is home to no less than 150 different ethnic groups and indigenous people. Important minorities include Tatars – 3.7%, Ukrainians – 1.4%, Bashkirs 1.1%, and Chuvashes – 1%, Chechens – 1%, and Armenians 0.86%. 7.8 percent of the populations consists of other minorities, while 4 percent did not declare ethnic origin in the 2010 census. 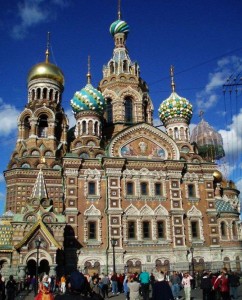 Russia has four traditional religions that are recognized by the government and are a part of the country’s “historical heritage”: Orthodox Christianity, Islam, Judaism and Buddhism. Although Russia has large populations of non-practicing believers and non-believers, it’s estimated that more than 71 percent of its inhabitants belong to the Russian Orthodox Church. The Muslim population of Russia ranges from 7-9 million through 15-20 million (depending on sources). Other religions include other Christian cults (almost 6%), Neopaganism & Tengrism (1.2%), Buddhism (0.5%), Hinduism, Judaism and Taoism. 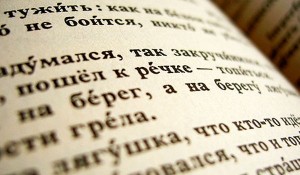 The country’s only official language is Russian, which is spoken by more than 80 percent of the total population. However, more than 100 minority languages are spoken in Russia, with 27 different languages being considered official in various regions of the Federation (along with Russian). Five other languages have more than one million speakers: Tatar (6.5 million), Chuvash (1.64 million), Bashkir (1.45 million), Chechen (1.34 million), Ukrainian (1.3 million) and English (1.2 million). Armenian and German are spoken by about 900,000 people each. About 21 minority languages are classified as endangered, with some most of them having less than 100 speakers. 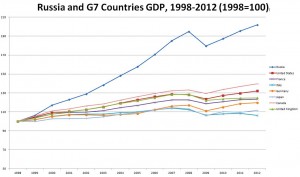 Since the collapse of the Soviet Union back in 1991, Russia has undergone significant changes, moving from a globally-isolated economy to a more market-based and globally-integrated economy due to reforms introduced since the 1990s. Russia has the 8th largest economy in the world by nominal GDP ($2 trillion) and the 6th largest by purchasing power parity ($2.5 trillion). At the time of writing, GDP growth is rated at 1.8 percent, while GDP per capita is estimated at $14,247. Almost one percent of Russia’s population lives below the World Bank’s poverty line. Russia has abundant reserves of oil, natural gas, coal, and precious metals, which account, along with timber, for more than 80 percent the country’s exports. According to the CIA World Factbook, Russia’s long-term challenges include a shrinking workforce, rampant corruption, and underinvestment in infrastructure.

Please visit us again as we’ll be publishing the projected population of Russian in 2014 as it becomes available. The Sochi 2014 Winter Olympics have brought allot of attention to the potential for violence and terrorism in the region. Before the Olympics, most people had never even heard of Sochi and didn’t know where it was.