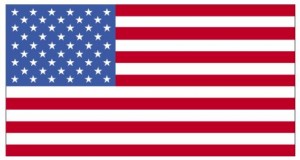 Located on the North American continent between Canada and Mexico, the United States of America (commonly called USA or the United States) is a federal republic consisting of fifty states and the federal district of Washington D.C. Out of the fifty states, 48 are located on the continental North America, while the State of Alaska is west of Canada, and the state of Hawaii is an island in the mid-North Pacific. The country also has other five populated territories in the Pacific and the Caribbean: Puerto Rico, Guam, US Virgin Islands, American Samoa, and Northern Mariana Islands.

With a 2013 population of around 315,000,000 people, the United States is the third most populous country in the World, after China and India, which have more than one billion people each. The US is also the World’s third largest country, stretching on a surface of 3.79 million square miles.

The United States of America declared its independence from the United Kingdom on July 4, 1776, and its current constitution was established in June 21, 1788. The country’s capital is located in Washington D.C., while New York is the largest city by far.

Other armed conflicts involving the United States after World War II were the Korean War when the Americans fought the Communist Chinese and North Korean forces, and the Vietnam War. The United States was also an important player in the Cold War Era that spanned from the 1950s until the early 1990’s, when the Soviet Union, America’s greatest opponent, collapsed. Starting 1991, the US experienced its greatest economic expansion and took a leading role in the Gulf War against Iraq. On September 11, 2001, Al-Qaeda terrorists struck the World Trade Center in New York and the Pentagon, killing nearly 3,000 people and marking the biggest attack on US land since Pearl Harbor. In response, the United States and its allies invaded Iraq to bring Saddam Hussein down, who was captured, tried, and then executed. United States troops pulled out of Iraq in 2011, after Al-Qaeda leader Osama bin Laden was killed in Pakistan during a Navy SEALs’ intervention. 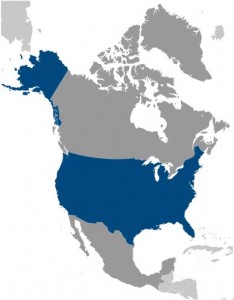 US territory. Source: US Census

The United States of America has a contiguous area, which consists of the 48 adjoining US states that are located south of Canada and north of Mexico, of 2,959,064 square miles. Alaska, located west of Canada, has a surface of 663,268 square miles, while Hawaii, an island in the mid-North Pacific, is 10,931 square miles. Overall US surface varies depending on how size is measured and often ranges from 3,676,486 square miles to 3,794,101 square miles. The United States is the world’s third largest country, behind Russia and Canada and is slightly larger than China. The top 10 largest of the United States by land area are (in order) Alaska, Texas, California, Montana, New Mexico, Arizona, Nevada, Colorado, Oregon and Wyoming.

Population in the United States

According to an US Census Bureau estimate, the United States has a 2013 population of 316,669,000 people, which makes it the world’s third most populous country behind China and India. The number also includes at least 11 million illegal aliens. The last official Census, which ocurred in 2010, revealed a total population of 308,745,538, a 9.7 percent increase from the 2000 Census. 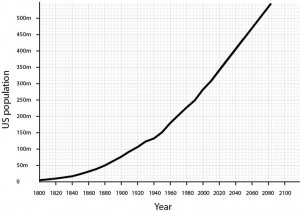 The United States also has a tradition in large-scale immigration from many countries. Only in 2012, over one million immigrants were granted legal residence. In the past 20 years, most immigrants have come to the US from Mexico, China, India and Philippines. Total population life expectancy is 78.62 years, with 76.19 years for males and 81.17 years for females. As far as sex ratio is concerned, there are 0.97 male/female.

Largest city in the United States 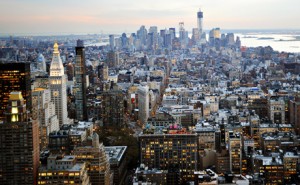 United States of America’s largest city is New York City, with a population of 19 million, followed by Los Angeles (12.9 million). New York City, which is one of the most populous urban agglomerations in the world, has, as of 2012, an official population of of 8,336,697, while metropolitan area is home to 19,015,900 people. Overall density is 27,550 people per square mile.

According to a July 2012 estimate, United States’ most populous state is California, with a population of 38 million, followed by Texas – 26 million, New York – 19.5 million, and Florida – 19.3 million. We will update this with 2016 population and census data when it becomes available.

Ethnicity in the United States 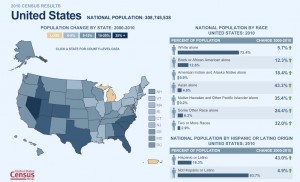 Being a multicultural nation, the United States is home to a variety of ethnic groups. According to the 2010 Census, white Americans make up the largest racial group in the country – 72.4 percent, followed by black/African American (12.6 percent), Asian (4.8 percent) American Indian/Alaska natives (0.9 percent) and native Hawaiian/pacific islander (0.2 percent). Multiracial population totals 2.9 percent, while other races represent 6.2 percent.

Religion in the United States

According to a 2007 survey, about 78 percent of United States population is Christian, with Protestants accounting for 51.3 percent, Roman Catholics – 23.9 percent and other Christians – 3.3 percent. Non-Christian religions account for 4.7 percent of the population, including Jewish (1.7 percent), Buddhist (0.7 percent) and Muslim (0.6 percent). A 2015 estimate also reveals that 16.1 percent of Americans described themselves as having no religion or being agnostic or atheist.

Language in the United States

The United States has no official language at federal level, but English (American English) is the de facto national language and it’s spoken by 80 percent of the population according to the 2010 Census. Spoken by 12 percent of Americans, Spanish is the second most common language in the US. Other languages spoken by at least one million people each include Chinese, French, Tagalog, Vietnamese, Italian, Korean and German. Hawaiian, Samoan, Chamorro and Carolinian have official recognition in islands such as Hawaii, American Samoa, Guam and the Northern Mariana.

The United States boasts the largest overall economy in the world with a Gross Domestic Product of close to $16 Trillion. California alone would rank in the world’s top economies and New York City is established as the second-largest economy for any city in the world, only trailing Tokyo in that department.

Please note: We will update this demographic and population pyramid data for the United States as soon as 2016 information becomes available as well as current development on the war in Afghanistan and the conflict in Syria. Additionally, we have just published information on the 2016 population of Alabama.