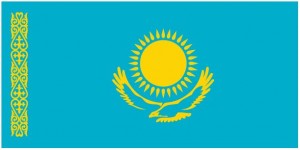 Kazakhstan, officially known as the Republic of Kazakhstan, is a country located in Central Asia, with a small part of its territory in Eastern Europe. With a total area of 1,053,000 square miles, Kazakhstan is the world’s ninth largest country by surface and the world’s largest landlocked state. The Asian country is bordered by Russia, China, Kyrgyzstan, Uzbekistan, and Turkmenistan, as well as the Caspian Sea, while its land boundaries are 7,571.41 miles long. According to a July, 2013 estimate the population of Kazakhstan is 17,700,000, making it the 62nd largest country in the world by population. The capital is Astana, while the largest city is Almaty. 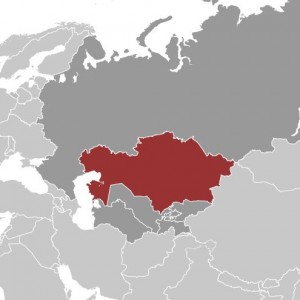 Inhabited since the Neolithic Age, today’s Kazakhstan was established at the Kazakh Khanate in 1456 and starting the 19th century it became part of the Russian Empire. The territory gained autonomy in 1917 after the fall of the Russian Empire, but it became an autonomous republic with the Soviet Union three years later. Kazakhstan was proclaimed a Soviet Socialist Republic in December 1936 and it declared its independence in December 16, 1991, after the dissolution of the Soviet Union. Now a dominant-party unitary presidential state, Kazakhstan is led by president Nursultan Nazarbayev since April 24, 1990. 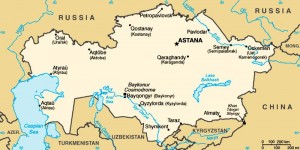 Bordered by Russia to the north and north-east, by China to south-west and by Turkmenistan, Uzbekistan and Kyrgysztan to the south, Kazakhstan is the ninth largest country in the world, with a total area of 1,053,000 square miles (2,727,300 square kilometers), slightly less than four times the size of Texas. In addition, Kazakhstan is also one of the only two landlocked countries in the world lying on two continents. Kazakhstan is divided into 14 provinces, which are subdivided into districts. One third of the country’s territory is occupied by the Kazakh Steppe, which is characterized by large areas of grasslands and sandy regions, while more than three-quarters of the land is either semi-desert or desert with eroded terrain and sand dunes. Kazakhstan’s climate is continental, with warm summers and colder winters. The Republic of Kazakhstan faces several environmental related problems, especially concerning heavily polluted water, industrial pollution, and radiation caused by nuclear tests carried by the Soviet Union in the Semey region. 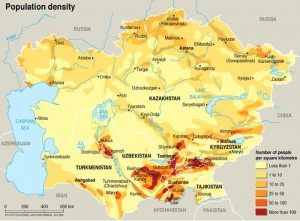 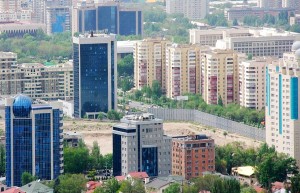 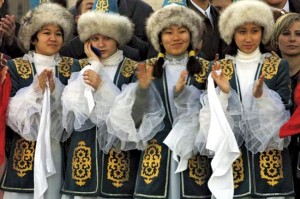 Kazakhstan is home to two dominant ethnic groups, ethnic Kazakhs and ethnic Russians, but more than other 16 minority groups are known to live in the country.The diverse demography is due to its historical use by Russia as a place to send colonists, dissidents, and minority groups from its other frontiers. According to the 2009 census, Kazakhs account for 63.1 percent of the total population, while Russians number 23.7 percent. An important number of Uzbeks – 2.9%, Ukrainians – 2.1%, Uygurs – 1.4%, Tatars – 1.3%, and Germans – 1.1% also live in Kazakhstan. Other minority ethnic groups that inhabit the Asian country are Koreans, Turks, Azeris, Belarusians, Dungans, Kurds, Tajiks, Poles, Chechens and Kyrgyz. 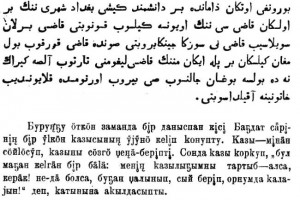 Kazakhstan is known as a bilingual country, with Kazakh as state language and Russian as official language. Kazakh is spoken by 64.4 percent of the population, while Russian, spoken by almost all the country’s inhabitants, is used in everyday business and as the “language of inter-ethnic communication”. Other languages spoken in Kazakhstan are Ukrainian, German, Uzbek, and Tatar just to name a few. English has also increasingly popular among the youth since the dissolution of the Soviet Union. 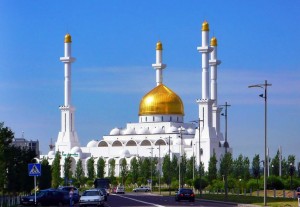 A secular state by constitution, Kazakhstan’s largest religion is Islam, with Muslims accounting for 70 percent of the population according to the 2009 census. 26.6 percent of Kazakhs follow the Christian religion (mostly Russian Orthodox), while 3.4 percent have other beliefs, including Buddhism, Judaism, Baha’i or Hinduism. Some 2.8 percent have declared themselves as Atheists. 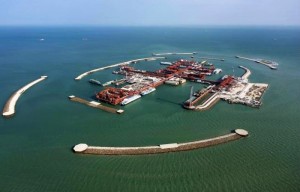 The economy of Kazakhstan is rated as the largest in Central Asia, with the country possessing enormous oil reserves and abounding supplies of uranium, copper and zinc. Kazakhstan is also home to the Baikonur Cosmodrome, the world’s first and largest operational space launch facility. Leased by the Kazakh government to Russia until 2050, Baikonur took over all launches to the International Space Station during the temporary lapse of the United States’ Space Shuttle program after the Columbia Disaster in 2003. Business with booming Russia and China, as well as increased prices on world markets for oil exports have helped Kazakhstan’s economy grow fast since 2000. In 2012, Kazakhstan’s GDP by purchasing power parity (PPP) was of $231.3 billion (53rd in the world), while GDP per capita was $13,900 (96th in the world). It’s estimated that about 5 percent of the country’s population lives below the World Bank’s poverty line.

Interested in the developing demography of Kazakhstan? Please visit us again soon for updated data including a 2014 estimate of the population as well as a religious map of Kazakhstan.