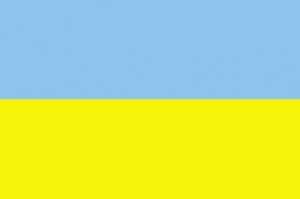 Ukraine, which means “in-land”, “home-land” or “our-country”, is a state located in Eastern Europe, bordering the Black Sea, between Poland, Romania, and Moldova in the west and Russia in the east. Slightly smaller than Texas, Ukraine has a total area of 233,090 square miles, being the 46th largest state in the world. Ukraine has a 2013 population of approximately 44.5 million people and a density of 199 inhabitants per square mile. By population, Ukraine is ranked 30 in comparison to the world. Kiev is the capital and the largest city in Ukraine, being home to about 3.6 million people. 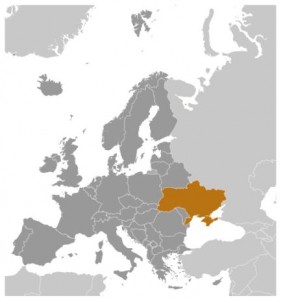 In the 10th and 11th century, Ukraine was the center of the largest and most powerful European state, the Kievan Rus, also the first eastern Slavic state. Because of the Mongol invasions, Kievan Rus was taken under control by the Grand Duchy of Lithuania and then by the Polish-Lithuanian Commonwealth. During the mid-17th century, a new Ukrainian state was established. Its name was Cossack Hetmanate and managed to remain autonomous for more than 100 years despite the Muscovite pressure.

Throughout the 18th century, Ukraine was incorporated into the Russian empire. Between 1921-22 and 1932-33, the Soviets engineered two forced famines in Ukraine in which over 8 million people died. During the second one, named The Holodomor Famine and known as the “Terror-Famine in Ukraine” and “Famine-Genocide in Ukraine”, it is said that at least 3,500,000 Ukrainians and Cossacks died of starvation.

Even though Ukraine gained its independence in 1991, the state, including civil liberties, still suffer due to Russian rule. The legacy of state control and endemic corruption are only a few of the effects of the former Soviet regime. 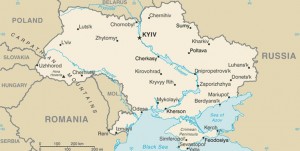 Bordered by Belarus, Hungary, Moldova, Poland, Romania, and Slovakia, Ukraine is strategically located at the crossroads between Europe and Asia. The country has a total area of 233,090 square miles, making it the largest country entirely within Europe, the 2nd second-largest country in Europe after Russia, and the 46th in comparison to the world. Most of Ukrainian terrain consists of fertile plains (steppes) and plateaus, mountains in the west (the Carpathians) and in the Crimean Peninsula, in the extreme south. The climate is temperate continental: Mediterranean only on the southern Crimean coast, with precipitations disproportionately distributed, highest in west and north, lesser in east and southeast. Winters vary from cool along the Black Sea to cold farther inland, while summers are warm across the greater part of the country and hot in the south. The lowest point in Ukraine is Kuyalnik Estuary, in the Black Sea (−16 feet) and the highest peak is Hora Hoverla (6,762 feet). Divided into 24 oblasts (provinces) and one autonomous republic, Crimea, Ukraine has some issues regarding environment: inadequate supplies of potable water, air and water pollution, deforestation, radiation contamination in the northeast from the 1986 Chernobyl Nuclear Power Plant accident. 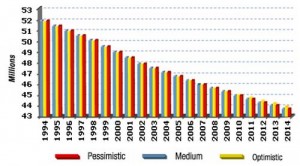 Ukraine has a total population of 44,573,205 people and a density of 199 inhabitants per square mile, according to a July 2013 estimate provided by CIA World Factbook. By population, Ukraine is the 30th most populous nation on Earth. A 2001 census revealed a population of 48,457,102 people, while a 2012 estimate shows a number of 44,854,065 people. A quick math calculation points out that from 2001 to 2013 Ukraine has lost 3,883,897 people. As of 2013, the growth population rate is of -0.63%. The nuclear accident that occurred in 1986 at Chernobyl is very important in the developing of the Ukrainian population considering it affected 500,000 workers, killed 31 people and still has long-term effects such as cancers and deformities. The Ukrainian population was also heavily affected by the two famines of1921-22 and 1932-33. 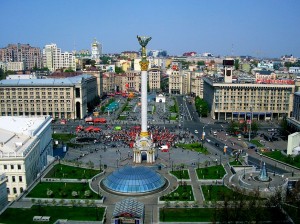 The capital and the largest city in Ukraine is Kiev, with a total population of 3,648,000 people, a density of 8,540 inhabitants per square mile and a surface of 324 square miles. According to touristic statistics, the third most visited McDonald’s in the world is located in Kiev! The next largest city in Ukraine is Kharkiv with 1,441,622 people. Kharkiv is followed by Odessa with 1,008,200 people, by Dnipropetrovsk with 1,001,962 people, and Donetsk with 962,024 people. Two cities have a special status in Ukraine: Kiev, the capital, and Sevastopol, which hosts the Russian Black Sea Fleet under a leasing agreement. 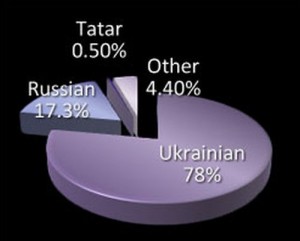 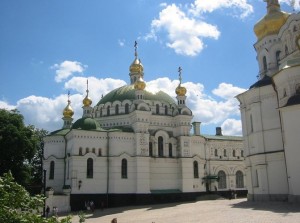 Orthodox Christianity is the dominant and official religion in Ukraine. There are 863 Latin Rite Catholic communities, and 474 clergy members serving some one million Latin Rite Catholics in the country. Ukrainian Orthodox – Kiev Patriarchate is practiced by 50.4% of the total population, while Ukrainian Orthodox – Moscow Patriarchate, is practiced by 26.1% of the population. People living in Ukraine also practice Ukrainian Greek Catholic – 8%, Ukrainian Autocephalous Orthodox  – 7.2%, Roman Catholic  – 2.2%, Protestant – 2.2%, Jewish – 0.6%, and other religions – 3.2%, in accordance to a 2006 census. Other religious groups include Calvinists, Jehovah’s Witnesses, Lutherans, Methodists, Seventh-day Adventists, and The Church of Jesus Christ of Latter-day Saints (Mormon). On the other hand, the 2006 census also shows that approximately 62.5% of the Ukrainian population considers itself as non-religious.

As stated by the Constitution adopted in June 1996, Ukrainian is the official language in Ukraine, spoken by 67% of the total population. Nevertheless, Russian is the second most spoken language, used by 24% of the population. Moreover, the Ukrainian Constitution recognizes Russian as the language of the majority of its population and guarantees its usage “in all spheres of public life.” As stated by a 2001 census, 67.5% of the people said that Ukrainian is their native language and 29.6% percent declared Russian as their native language. Other languages spoken in Ukraine are Romanian, Polish, and Hungarian, minorities that account for 9%. Another language that is state-protected in Ukraine is Crimean Tatar, spoken by 12% of the total population of Crimea. 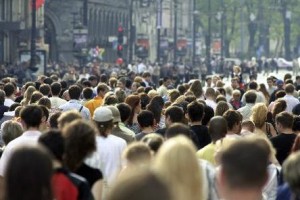 With an economy based largely on natural resources like iron ore, coal, manganese, natural gas, oil, salt, sulfur, graphite, titanium, magnesium, kaolin, nickel, mercury, timber, and arable land, Ukraine’s GDP was of $340.7 billion in 20012. By GDP, Ukraine is the 39th most developed country in the world. However, the GDP per capita is of only $7,500 and 24.1% of the Ukrainians live below World Bank’s poverty line. The economic growth rate in 2012 was negative and at a very low level (0.2%), in comparison to 2011 (5.2%) and 2010 (4.1%). More precisely, Ukraine finished 2012 in technical recession following two consecutive quarters of negative growth. One of the more important negative aspects of the Ukrainian economy is represented by its dependence on Russia for energy supplies. Ukraine reached two agreements with the International Monetary Fund (IMF), the first in November 2008 and the second one in August 2010. Both programs stalled due to the Ukrainian Government’s lack of progress in implementing reforms.