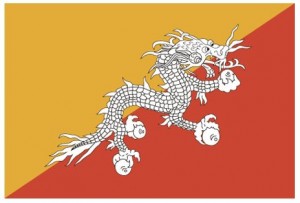 The Kingdom of Bhutan, one of the world’s 48 landlocked countries, is located in South Asia and at the eastern end of the Himalayas. It has a total area of 14,824 square miles, about one-half the size of Indiana, which makes it the world’s 135th state by surface. In 2013, the diminutive country has a population of about 750,000 and a density of 46.6 people per square mile. Bordered by the world’s most populous countries, China and India, Bhutan has 668 miles (1,075 km) of total land boundaries. Bhutan’s capital and largest city, with 99,000 people, is Thimphu. 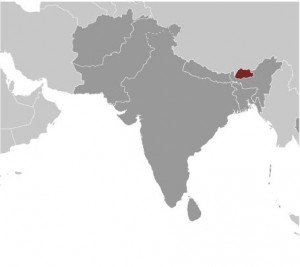 Ruled by the Wangchuk Dynasty since December 1907, the Kingdom of Bhutan became a constitutional monarchy in 2007. The country’s current king, Jigme Khesar Namgyel Wangchuck, was crowned in November 2008. Bhutan became one of the last countries to introduce television in 1999, after the government lifted a ban on television and internet. Bhutan joined the United Nations in 1971 and is also a member of the South Asian Association for Regional Cooperation (SAARC).

Located in South Asia, Bhutan has a total surface of 14,824 square miles (38,394 kilometers) and it’s the world’s 135th largest country by area. The land consists mostly of steep and high mountains and elevation rises from 660 feet to more than 23,000 feet. The highest point in Bhutan is Gangkhar Puensum at 24,840 feet, which is the highest unclimbed mountain in the world. The climate varies from subtropical to polar and has five distinct seasons: summer, monsoon, autumn, winter and spring. The country is divided into twenty administrative divisions, which are called dzongkhags. 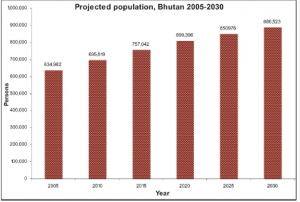 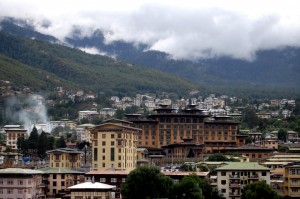 Thimphu (Thimpu) is Bhutan’s capital and largest city. It has a total population of 99,000 (2011 estimate) and a density of about 9744 inhabitants per square mile. Thimphu became the capital city of Bhutan in 1961 and is the political and economic center of the country, having a dominant agricultural and livestock base. Thimphu does not have an airport. The next largest city in Bhutan is Phuntsholing, which is home to 60,400 people. Punakha (pop. 21,500) and Samdrup Jongkhar (pop. 13,800) are the other two towns with a population of more than 10,000.

Buthanese people consist of Ngalops and Sharchops. Called Western Bhutanese and Eastern Bhutanese respectivelly, they make about 50 percent of the country’s population. 35 percent are ethnic Nepalese (including Lhotsampas), while 15 percent are indigenous or migrant tribes.

About 76 percent of Bhutan’s population follows the Vajrayana Buddhism (Lamaistic Buddhism), which is also the state religion. About 23 percent practice Indian and Nepalese-influenced Hinduism, while other religions account for less than one percent of the population. While the Bhutanese constitution guarantees freedom of religion, proselytism is forbidden by a royal government decision. 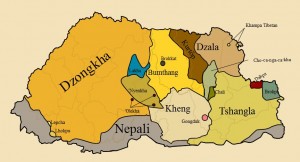 Bhutan’s national language is Bhutanese (Dzongkha), which is one of 53 languages of the Tibetan language family. However, Dzonghka is spoken by only 24 percent of the population, with Sharchhopka being used by a greater number of people – 28 percent. Lhotshamkha, spoken by the Nepali community, is the country’s third most spoken language – 22 percent. Other large minority languages are Dzala (11 percent), Limbu (10 percent), and Kheng (8 percent). A total of 24 languages are currently spoken in Bhutan, almost all of them from the Tibeto-Burman family. 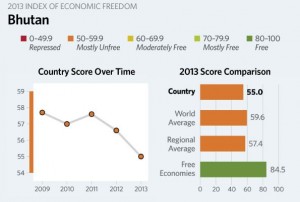 Based on agriculture and forestry, Bhutan has one of the world’s smallest and least developed economies. The country’s GDP is $5,036 billion as of 2012, while GDP per capita is rated at $6,800. GDP growth last year was 9.7 percent. Bhutan has a labor force of almost 300,000, but the country suffers from a major shortage of skilled labor. Main industries in Bhutan are cement, wood products, processed fruits, alcoholic beverages, calcium carbide, tourism. According to the CIA World Factbook, almost one-quarter of Bhutan’s population is living below the World Bank’s international poverty line.