Brunei, officially known as the Nation of Brunei or the Abode of Peace, is a country in Southeastern Asia. Brunei is a constitutional sultanate (locally known as Malay Islamic Monarchy) and it borders Malaysia and the South China Sea. With a total area of 2,226 square miles, it is slightly smaller than Delaware. By surface, it is the 173rd largest country in the world. Brunei is home to about 415,000 people and has a density of 174.4 inhabitants per square mile. By population, it is ranked 174th in comparison to the world. The capital and the largest city in Brunei is Bandar Seri Begawan, with a population of approximately 276 thousand people.

Between the 15th and the 17th centuries, Brunei had an influential period when it took control over the coastal areas of southern Philippines and of northwest Borneo. Due to internal bitter conflicts over royal succession, piracy, and colonial expansion of great European powers, Brunei entered a period of decline until 1888, when it became a British protectorate. Brunei managed to become independent from Britain in 1984. Being ruled by the same family for over six centuries, Brunei is now an Islamic Monarchy controlled by sultan Hassanal Bolkiah and crown prince Al-Muhtadee Billah. 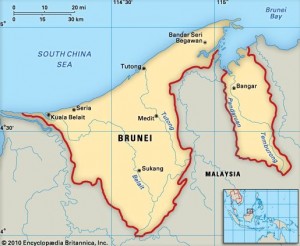 Strategically located in Southeastern Asia, near the South China Sea (which links Pacific and Indian Oceans), Brunei is close to vital sea lanes. Divided into 4 districts (Belait, Brunei-Muara, Temburong, and Tutong), Brunei has two parts physically separated by Malaysia. More precisely, Brunei is almost an enclave within Malaysia. With a total area of 2,226 square miles, Brunei is the 173rd largest country in the world. Its climate is tropical, with rainy, hot, and humid weather. In east, Brunei’s terrain consists of coastal plains and mountains, while in west it has hilly lowlands. The lowest point in Brunei is in the South China Sea, while the highest peak is Bukit Pagon (6,070 feet). Brunei’s natural resources are natural gas, petroleum, and timber, while natural hazards like earthquakes, typhoons, and severe flooding are rare. Regarding environment, Brunei has current issues like seasonal smoke/haze which has resulted from forest fires in Indonesia. 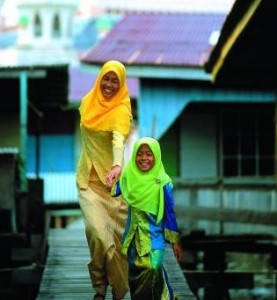 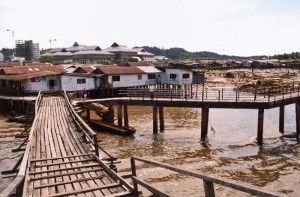 Located on the northern bank of the Brunei River, Bandar Seri Begawan is the capital and the largest city in Brunei. Bandar Seri Begawan is home to a total population of 276,608 and has a density of 3,610 inhabitants per square miles and a total area of 38.75 square miles. The next largest cities in Brunei are Kuala Belait, with a total population of 64,409 people, Seria, with a population of 31,178 people, Tutong, with 19,151 people, and Bangar, with 3,536 people. 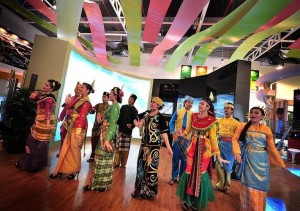 As stated by the 2011 census, Malays are the largest group in Brunei and number 258,465 persons. The next largest ethnic groups in Brunei are the Chinese, numbering 40,534, followed by other races, numbering 94,373 persons. Adversely, a 2004 census revealed that Malay is the most numerous ethnic group in Brunei, accounting for 66.3% of the total population, followed by Chinese, accounting for 11.2%, Indigenous (groups of the Malay race: Bisaya, Brunei, Belait, Dusun, Kedayan, Murut , and Tutong) accounting for 3.4%, and smaller ethnic groups that make up the rest of the population (19.1%). The largest amount of people lives in Brunei-Muara District (279,924 persons). The next most populated districts in Brunei are Belait District, with 60,744 people, Tutong District, with 43,852 people, and the Temburong District, with 8,852 people. 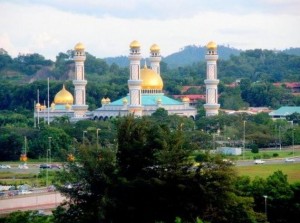 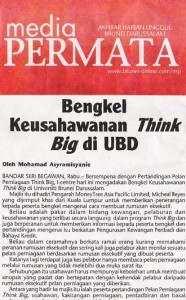 Brunei’s official language is Malay, while Melayu Brunei (Brunei Malay) is the principal spoken language. Melayu Brunei is 84% cognate with standard Malay and it’s rather divergent from the standard language and the rest of the dialects. Other languages spoken in Brunei are Chinese, Bahasa Rojak (used on some popular radio shows and by the public), Dusun, Iban, Kedayan, Murut, and Tutong. English is the most spoken foreign language. It is used in business and it is taught in schools, from primary to tertiary education.