The Republic of Latvia is located in Europe, bordering the Baltic Sea, between Estonia and Lithuania. With a total area of 24,938 square miles, Latvia is slightly larger than West Virginia. By land mass, Latvia is the 124th largest country in the world. Latvia is home to approximately 2.1 million people and has a density of 88.9 inhabitants per square mile, which makes it the 143rd most populous nation on Earth. Latvia’s capital and largest city is Riga, with about 1 million people and a density of 263 inhabitants per square mile. 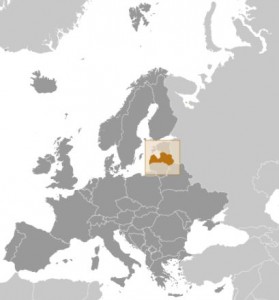 The name of the country – Latvia – comes from the ancient Latgalians, one of the four eastern Baltic tribes that formed the ethnic core of the Latvian people. Even though the Republic of Latvia was founded on November 18, 1918, it took a while for Latvia to become independent. After coming under German, Polish, Swedish, and Russian rule before World War I, Latvia was annexed by the Soviet Union in 1940. The country won its independence in 1991, after the the Soviet Union was dissolved. However, the Russian troops left Latvia only in 1994. As other European countries, Latvia managed to get off Moscow’s influence in the spring of 2004, when it joined both the North Atlantic Treaty Organization (NATO) and the European Union (EU). Today, Latvia is a parliamentary democracy, ruled by President Andris Bērziņš and Prime Minister Valdis Dombrovskis. 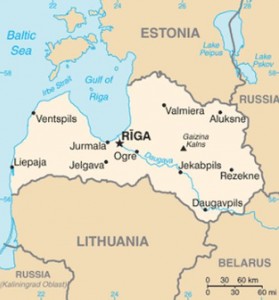 Latvia is situated in Northern Europe and is a Baltic state, along with Estonia and Lithuania. With a total surface of 24,938 square miles, Latvia is the 124th largest state in comparison to the world. Bordering Estonia to the north, Lithuania to the south, Russia to the east, Belarus to the southeast and having a maritime border to the west with Sweden, Latvia is divided into 110 municipalities and 9 cities. Latvia’s climate is maritime, with wet and moderate winters. The terrain consists mostly of low plains. More precisely, most of the country is composed of fertile low-lying plains with some hills in the east. The lowest point in Latvia is the Baltic Sea, while the highest peak is Gaizina Kalns (1,024 feet). Latvia is a member of the European Union, Council of Europe, the Council of the Baltic Sea States (CBSS), the International Monetary Fund (IMF), NATO, the Organization for Security and Cooperation in Europe (OSCE), the United Nations, and the World Trade Organization (WTO). 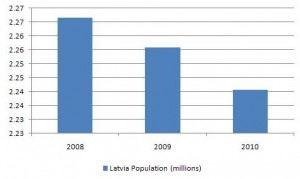 Latvia’s total population numbers 2,178,443 people and has a density of 88.9 inhabitants per square mile, according to an August, 2013 estimate provided by CIA World Factbook. By population, Latvia is ranked 143rd in comparison to the world. The last census of Latvia’s population took place in 2011 and revealed a total population of 2,070,371 people. This means that between 2011 and 2013 Latvia’s population increased with 108,072 people. As of 2013, the population growth rate is negative (-0.61%). As stated by the CIA, the degree of major infectious diseases is intermediate. However, as of 2013, vector borne disease like tick-borne encephalitis is thought to be a problem in Latvia. Life expectancy at birth of the total population is of 73.19 years, 68.13 years for males and 78.53 years for females. Birth rate is of 9.91 births/1,000 population, death rate is of 9.91 births/1,000 population, and sex ratio of the total population is 0.86 male(s)/female. According to a projection made by the Central Statistical Bureau of Latvia, the population will decrease to 2,022,351 people by the end of 2030. 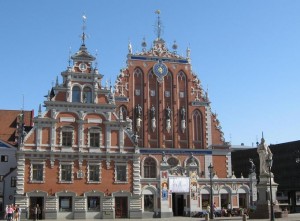 Latvia’s capital and largest city is Riga, with a total area of 3,912 square miles. With 1,018,295 people and a density of 263 inhabitants per square mile, Riga is home to almost half of Latvia’s population. The main touristic attraction of the Latvian capital is the Old Riga, rich in monuments, museums, and cafe restaurants. The second largest city in Latvia is Daugavpils – 101,057 people, followed by Liepaja –  82,386 people, Jelgava –  63,534 people, and Jurmala –  56,060 people. 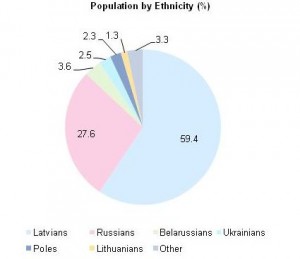 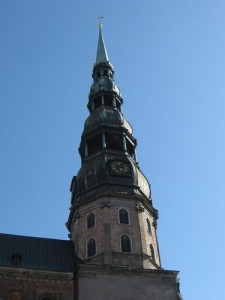 The 2011 census also brought up into open that even though only about 7% of the population attends religious services regularly, Christianity is the largest religion in Latvia. The biggest Christian groups in Latvia are Evangelical Lutheran Church of Latvia (34.2% – 708,773), Roman Catholic (24.1% – 500,000), and Russian Orthodox (17.8% – 370,000). 1.6% of the Latvians are Old Believers, 1.2% are other Christian, while 21.1% practice other religions or none. Other religions include Seventh-day Adventists, Jehovah’s Witnesses, Methodists, Jews, Buddhists, Muslims, Vaishnavists, Mormons, Pentecostals, Evangelicals, New Apostolics, Dievturi, Salvation Army, Old Apostolics, New Generation, Augsburg Lutheran, German Lutheran, and Reformed. Nevertheless, the Latvian Justice Ministry maintains that according to the numbers, the majority of the Latvian population is atheist. 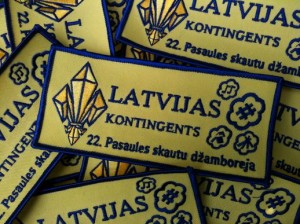 Despite being the official language in Latvia, Latvian is spoken only by 58.2% of the country’s population. The second most spoken language in Latvia is Russian, used by 37.5% of the population. This is the reason why on February 18th, 2012, Latvia held a constitutional referendum on whether to adopt Russian as a second official language. 74.8% voted against, 24.88% voted in favor, and the voter turnout was 71.11% according to the Central Election Commission. But a large part of the Russians who live in Latvia couldn’t vote because they did not hold a citizen status (so they don’t have the right to vote). Also, Livonian, Latgalian (both languages are protected by the state), Lithuanian, English, German and other languages are spoken by 4.3% of the population. 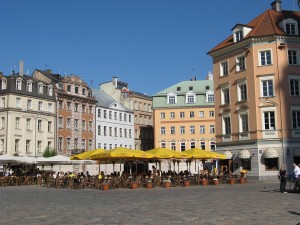