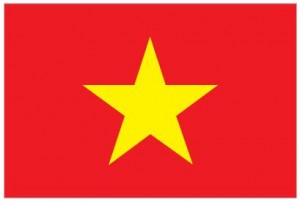 The Socialist Republic of Vietnam is located in Southeast Asia and is also the easternmost country on the Indochina Peninsula. Bordering the Gulf of Thailand, Gulf of Tonkin, and South China Sea, as well as China, Laos, and Cambodia, Vietnam’s surface is slightly larger than New Mexico – about 128,000 square miles, divided into 58 provinces and five municipalities. 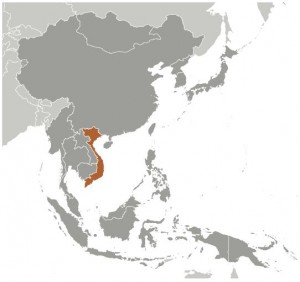 With a density of 703 people per square mile, the population of Vietnam in 2018 is about 92.5 million, ranking it 14th in the list of the most populous nations in the world, according to a CIA World Factbook estimate in July 2014 and is at the top of the list of the world’s emerging tourist attractions, as selected by international visitors in 2012. Since the reunification of North and South Vietnam in 1976, Hanoi is the capital city, but Ho Chi Minh City is the largest. Ho Chi Minh City was named after Ho Chi Minh, a Vietnamese communist revolutionary leader who was prime minister (1945-1955) and president (1945-1969) of the Democratic Republic of Vietnam (North Vietnam). The Vietnamese had to fight for independence more than once: in 938, when they became independent from China, and in 1945, when they became independent from France.

In 1954, after the French were expelled from Indochina, Vietnam remained politically divided between two states, North and South Vietnam, which led to a long and brutal war, which lasted from 1955 through 1975. The South Vietnam anti-communist forces gained direct support from the United States of America, who started sending heavy troops in the area in the 1960s, while the pro-communist North Vietnam was backed by the Soviet Union and China. The war ended in 1975, two years after US military involvement ceased, when North communist Vietnam captured the city of Saigon. Estimates claim that 800,000 to 3.1 million Vietnamese soldiers and civilians were killed during the war.

Today, ruled by president Truong Tan Sang and vice president Nguyen Thi Doan, Vietnam is a communist state according to its current Constitution which replaced the 1975 Constitution in April 1992.

Located in Southeastern Asia, the Socialist Republic of Vietnam has a total surface of 128,565 square miles of which 2,883 miles country’s land and boundaries and 2,140 miles coastline, making it the 66th largest country in the world. The terrain is a low, flat delta in south and north while hilly and mountainous in far north and northwest. The land consists mostly of tropical forests (around 42%), mountains (40%) and level land (no more than 20%). The highest mountain in Vietnam is Phan Xi Păng – 10,312 feet, situated in Lao Cai province, in the northern part of the country. The climate of Vietnam is tropical in south and monsoonal in north with hot, rainy season, from May to September, and warm, dry season, from October to March. 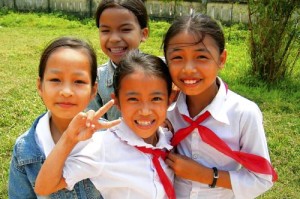 The population of Vietnam is standing at 92,477,857 million with a density of 704 people per square miles in accordance to an estimate for July, 2013 provided by CIA World Factbook. The latest census of the Vietnamese people took place in 2009 and recorded a total population of about 85.8 million. From the 1979 census, which showed the total population of reunified Vietnam – 52.7 million, the population had grown significantly – with 62.8% (about 33 million people). Population growth rate is estimated to 1.03% (CIA World Factbook). Birth rate reached 16.56 birth/1,000 population, while death rate is 5.94 deaths/1,000 population. The median age in Vietnam is 28.7 years, 27.6 years for males and 29.7 years for females, and the sex ratio at birth is rated at 1.12 male(s)/female. Life expectancy at birth is 72.65 years (70.2 years for males and 75.4 years for females). Net migration rate is 0.33 migrant(s)/1,000 population as of for 2013 (CIA World Factbook). A projection published by the General Statistics Office of Vietnam indicated that the population will reach 96.5 million people in 2020 and 111.8 million people in 2049. 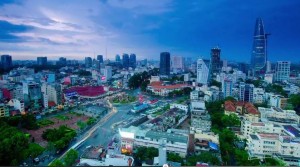 Ho Chi Minh City is the largest city in Vietnam. According to a 2009 estimate, it has 7,521,130 million people and a density of approximately 9,294 inhabitants per square mile. Ho Chi Minh is commonly known under the name Saigon, when it was the capital of the French colony of Cochin-china and then the capital of the independent republic of South Vietnam. After the reunification of North and South Vietnam, in 1976, Saigon united with Gia Dinh Province and was renamed Ho Chi Minh City, after Ho Chi Minh. The next largest city in Vietnam is capital Hanoi with a population of about 6.4 million people and a density of 5,000 citizens per square mile. Haiphong and Chan Thao are the other two large cities in Vietnam with more than 1 million inhabitants. 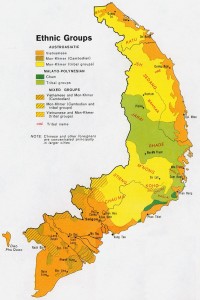 The main ethnic group in Vietnam is Viet or Kinh and it represents nearly 73.6 million, or 85.8% of the total population. Vietnam is a multi-ethnic country with 54 distinct groups recognized by the Vietnamese government. Each ethnic group has its own language, lifestyle, and cultural heritage. These are 54 ethnic groups recognized by the government. After Viet or Kinh, Tay is the largest minority in Vietnam (1.9%), followed by Thai, with 1.7% , Muong – closest to Kinh Vietnamese, other half of Viet–Muong language family (1.5%), Khmer Krom – 1.4%, Hoa (Chinese) – 1.1%, Nung – 1.1%  and H’mong (formerly known as Meo) – also known as Miao in China (1%). 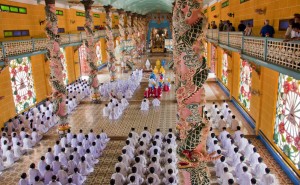 The official language of Vietnam is Vietnamese, a tonal monosyllabic Mon-Khmer language. Vietnamese is spoken by the majority of the population and also by the approximately 3 million Vietnamese residing elsewhere. However, English is increasingly favored as a second language. Other languages spoken in Vietnam are the ones used by Vietnam’s minority groups, who use a variety of languages, including Tay, Muong, Cham, Khmer, Chinese, Nung, H’Mong, and French. The Montagnard people of the Central Highlands also speak a number of distinct languages. Vietnamese writing used Chinese characters until the 13th century, when the Vietnamese created their own set of characters. 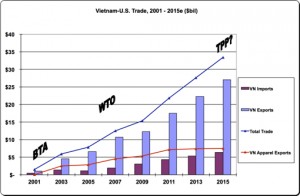 Vietnam is now a densely-populated developing country that has been transitioning from a rigid, centrally-planned economy since 1986. With an economy supported by agriculture, services and industry, it has a gross domestic product (GDP) of 325.9 billion dollars, while the GDP per capita is rated at 3,600 dollars and the growth in 2012 was of 5%. According to CIA World Factbook, Vietnam has one of the most 50 developing economies in the world (rank 42). In 2005, Goldman Sachs forecasted that by 2025, Vietnam will become the 17th largest economy in the world with nominal GDP of 436 billion dollar and nominal GDP per capita of USD$4,535. Until then, 11.3% of the Vietnamese live below the World Bank’s international poverty line.

Facts and figures will be updated in late 2017 or early 2018 as they become available with new census data.