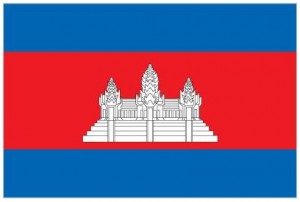 The Kingdom of Cambodia, once known as the Khmer Empire, is a country located in Southeastern Asia, bordering the Gulf of Thailand, between Thailand, Vietnam, and Laos. With a total area of about 69,898 square miles, Cambodia is slightly smaller than Oklahoma, which makes it the world’s 90th nation by surface. In 2014, Cambodia has a population of about 15,300,000 people and a density of 211.8 inhabitants per square mile. By 2018 population, it is ranked 68th out of all the countries in the world. Cambodia’s capital and largest city is Phnom Penh, with a population of 2,300,000 people and a density of 8,800 persons per square mile. 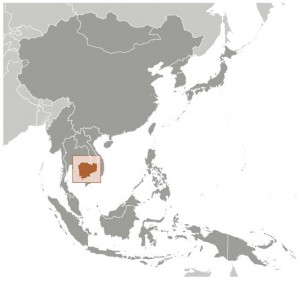 Cambodia, which became independent from France in November 1953, is now a multiparty democracy under a constitutional monarchy promulgated in 1993. Before being a democracy, Cambodia had its deathly years under the dictatorship of Pol Pot, a communist revolutionary who led the Khmer Rouge (the name given to the followers of the Communist Party of Kampuchea in Cambodia) from 1963 until his death in 1998. Pot’s rule became known as the era of the “killing fields” when the cities were emptied and about quarter of the country’s 8 million people were slaughtered by the Khmer Rouge. More precisely, Pol Pot’s name came to symbolize the deaths of 2 million people under his rule in Cambodia for four horrific years: 1975 to 1979. Ruled by King Norodom Sihamoni (since 29 October 2004) and by Prime Minister Hun Sen (since 14 January 1985), Cambodia is divided in 23 provinces and one municipality. Being one of the poorest countries in Asia, more than 50% of the government budget comes from donor assistance – the Cambodian government is working with bilateral and multilateral donors, including the Asian Development Bank, the World Bank and IMF.

Located in Southeast Asia, Cambodia has a total surface of 69,898 square miles and it’s the world’s 90th largest country by area. Along a 275 miles coastline, it borders Thailand to the north and west, Laos to the northeast, and Vietnam to the east and southeast. Cambodian terrain consists of mostly low, flat plains with mountains in southwest and north. The soil has natural resources such as oil and gas, timber, gemstones, iron ore, manganese and phosphates. The lowest point in Cambodia is Gulf of Thailand (0 feet), while the highest point is Phnum Aoral at 5,949 feet (1,810 meters). The climate varies from tropical to dry season. During the tropical season, from May to November, the climate is rainy, monsoon season, while during the dry season, from December to April, the variation of temperature is little. Tonle Sap (Great Lake), measuring about 1,000 square miles, is a combined lake and river system. In 2001, by royal decree issued by the Government of Cambodia, the lake and its surroundings provinces became The Tonle Sap Biosphere Reserve. 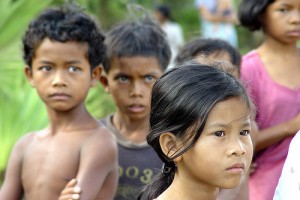 Cambodia has a 2017 population of 16,245,729 people and a density of 211.8 per square mile, as stated by a July, 2013 estimate provided by CIA World Factbook. For Cambodia, the estimate was calculated  considering the effects of excess mortality due to AIDS, which can result in lower life expectancy, higher infant mortality, higher death rates, lower population growth rates, and changes in the distribution of population by age and sex than would otherwise be expected. The last census took place in 2008 and indicated a total population of 13,388,910 people. A 2013 estimate indicates a population growth rate of 1.67%, making Cambodia the 71st country in the world by growth of the human population, while birthrate is 24.88 births/1,000 population. Life expectancy at birth is of 63.41 years – rank 179 in the world -, 61.01 years for males and 65.93 years for females. Sex ratio at birth is 1.05 male(s) per female and of total population is of 0.94 males(s) per female. According to a 2009 estimate, 3,100 people from Cambodia died of HIV/AIDS. The degree of being infected with major food, waterborne, and vector borne diseases is very high. The country’s urban population is projected to double until 2030, while the rural population will grow only by 14.2%. By the end of the projection period, urban areas will be experiencing an annual growth of 2.22% while rural areas of only 0.25%. In general, the growth in urban areas will be determined mainly by migration.

The Throne Hall in Phnom Penh

The largest city in Cambodia is the capital Phnom Penh, situated on the banks of the Mekong River in the province with the same name, with a population of 2.3 million people and a density of 8,800 inhabitants per square mile. Phnom Penh literally means “Penh’s Hill” and was named after the present Wat Phnom (“Hill Temple”). Once known as the “Pearl of Asia”, Phnom Penh has been the capital of Cambodia since French colonization of the country. The second largest city in Cambodia is Ta Khmao, from Kandal province, with a total population of 195,895 people, followed by Sisophon, with 181,396 people and Battambang, with 180,853 people. 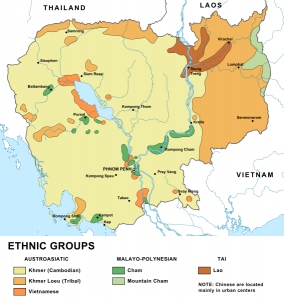 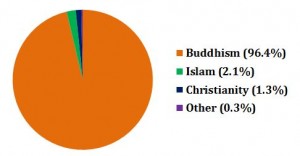 The official religion in Cambodia is Buddhism – is practiced by 96.4% of the total population. More accurately, Theravada Buddhism is the oldest surviving branch of Buddhism. The next important religions in Cambodia are Islam, which has 2.1% followers, and Christianity (Catholics and Protestants), with 1.3% adherents. Amongst other religions and unspecified ones (0.2%) there are Baptists, The Christian and Missionary Alliance, Methodists, Jehovah’s Witnesses, Apostolic or United Pentecostals, and The Church of Jesus Christ of Latter-day Saints. 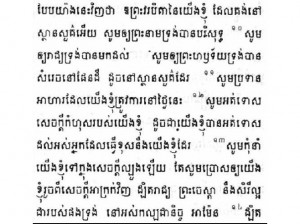 Cambodia’s official language is Khmer, a member of the Mon–Khmer subfamily of the Austroasiatic language group, spoken by 95% of the total population. French is the second most spoken language by the Cambodians and it has an important place in the country’s history. French was the official language in Cambodia after World War II. English is another language used by the people in Cambodia. 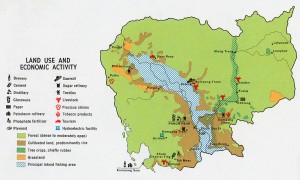 Reported to CIA World Factbook, Cambodia is one of the poorest countries in Asia and long-term economic development remains a daunting challenge because it is inhibited by endemic corruption, limited educational opportunities, high income inequality, and poor job prospects. Based on agriculture, industry and services, Cambodia’s GDP is $36.64 billion as of 2012 while GDP per capita is rated at $2,400. Approximately 4 million people live on less than $1.25 per day and 37% of Cambodian children under the age of 5 suffer from chronic malnutrition. Over the next decade, the major economic challenge for Cambodia will be fashioning an economic environment in which the private sector can create enough jobs to handle its demographic imbalance.

The population of Cambodia in 2017 as detailed on this page is an estimate only. If more accurate census data becomes available in 2018 we will post it promptly!