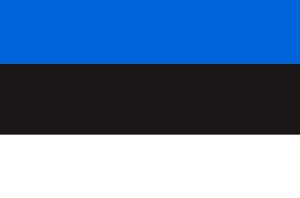 The Republic of Estonia is located in Northern Europe and it’s part of the Baltic region, which also includes Lithuania and Latvia. Bordered by Latvia and Russia, Estonia has a total area of 17,462 square miles, which makes it the world’s 132nd country by land mass.With a 2013 population of 1,260,000 people, Estonia is ranked 157th among the Earth’s most populous states. The country’s capital and largest city is Tallinn. It has a population of 426,503 people and occupies an area of 61.5 square miles. 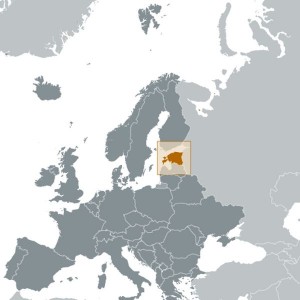 Estonia’s modern history begins in 1918, when the country declared its independence following the retreat of the Russian Red Army. Its independence was recognized in 1920, but the country was again occupied by Soviet forces in 1940, during World War II. The Baltic state fell under Nazi German rule starting 1941, and starting 1944 it became part of the Soviet Union. The United States, United Kingdom, France, Italy and the majority of other Western countries considered the annexation of Estonia by the USSR illegal. Estonia restored its independence on August 20, 1991, following the dissolution of the USSR.

Estonia is now part of the European Union (EU), the North Atlantic Treaty Organization (NATO), and the Organization for Economic Co-operation and Development (OECD). Rated as a country that performs favorably in measurements of press freedom, economic freedom, civil liberties and education, Estonia is now a parliamentary republic led by President Toomas Hendrik Ilves and Prime Minister Andrus Ansip. 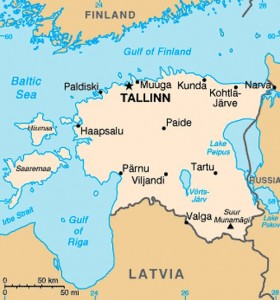 Estonia lies on the eastern shores of the Baltic Sea, being bordered by Latvia to the south, Russia to the East and the Gulf of Finland to the west. The country has total land boundaries of only 393 miles, of which 213 miles are with Latvia and 180 miles with Russia. With a total area of 17,462 square miles, Estonia is the world’s 132nd country by land mass. Estonia is divided into fifteen counties and each one is further divided into municipalities. The country’s average elevation reaches only 164 feet and the Republic’s highest point is the Suur Munamagi at 1,043 feet. Estonia is situated in the northern part of the temperate climate zone and in the transition zone between maritime and continental climate and has four seasons. 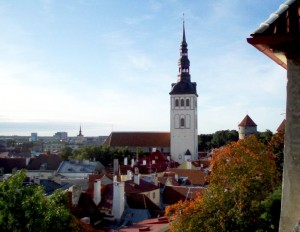 Tallinn is the largest city in Estonia. It has a population of 426,503 people, an area of 61.5 square miles, and a density of 6,900 people per square mile. Known as Reval from the 13th century until 1917, Tallinn is also the country’s capital and the oldest capital city in Northern Europe. Tallinn is ranked among the top 10 digital cities in the world and was the European Capital of Culture in 2011. Tallinn’s Old Town is listed among the UNESCO World Heritage Sites. Estonia has only one more city that is home to more than 100,000 people – Tartu (104,000 inhabitants). The next largest cities by population are Narva (pop: 58,663), Parnu (pop: 39,728), and Kohtla-Jarve (pop: 37,201). 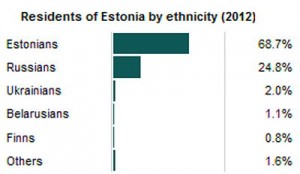 According to a 2012 estimate provided by stat.ee, Estonians make up for 68.7 percent of the country’s total population. However, Estonians actually account for more than 80 percent of the inhabitants in all of Estonia’s counties, except Harju (including Tallinn) and Ida-Viru (60 percent and 20 percent respectively). 24.8 percent of Estonia’s people are ethnic Russians, 2 percent are Ukrainians, 1.1 percent Belarusians and 0.8 percent Finns. Other minorities include Tatars, Latvians, Poles, Jews, Lithuanians, Germans and Swedes. 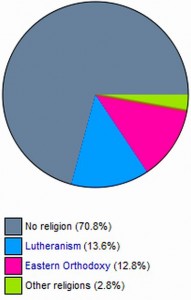 In accordance with the latest population census, 70.8 percent of Estonians are either unaffiliated to any religious group or have no religion at all. 13.6 percent of the population are followers of Lutheranism, while 12.8 percent are Orthodox Christians. Other religions include Baptism, Roman Catholicism, Jehovah’s Witnesses, Pentecostals, Old Believers, Adventists, Methodists and Muslims. The Union of Old Believers (raskolniks) are a very traditional people who felt the need to break free from the Russian Orthodox Church and live in isolated communities to hold to their more fundamental belief system. Their numbers total about 15,000 in numerous congregations centered largely around the Lake Peipsi region. There are also a number of smaller Protestant, Jewish, and Buddhist groups worshiping freely in Estonia.

Estonian is the only official language in Estonia and it’s spoken by 84 percent of the population. Estonian is closely related to the Finnish language, both of them belonging to the same Finnic branch of the Uralic language family. However, the two languages are not mutually intelligible. Estonian and Finnish are distantly related to the Hungarian language. Other important languages spoken in Estonia are Russian (heavily imposed during the Soviet era), Ukrainian, English, Finnish, and German. About 157 languages are natively spoken in Estonia. 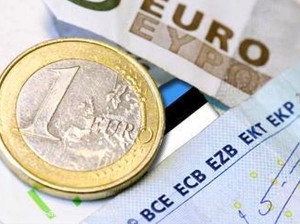 A member of the European Union and the Eurozone since 2004, Estonia has a modern market-based economy and one of the highest per capita income levels in Central Europe and the Baltic region. Estonia adopted the Euro currency on January 1, 2011. The country is ranked 16th in the 2012 Index of Economic Freedom, with the freest economy in Eastern Europe and the former Soviet Union. In 2012, Estonia had a national debt of only 6 percent, being one of the least indebted countries in Europe. Also in 2012, Estonia ranked 113th in comparison to the world with GDP by purchasing power parity at $29.57 billion. GDP per capita was rated at $22,100 – ranked 66th in the world, while GDP by official exchange rate was of $21.86 billion. Estonia’s most important trade partners are Finland, Sweden, Russia, and Germany.