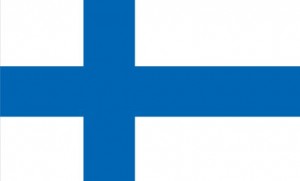 The Republic of Finland is a country situated in Northern Europe, bordering the Baltic Sea, Gulf of Bothnia, and Gulf of Finland, between Sweden and Russia. With a total area of 130,596 square miles, Finland is slightly smaller than Montana. By land mass, it is the 65th largest state in the world. Finland’s 2013 population is approximately 5,200,000 people and has a density of 41 inhabitants per square mile, making it the 116th most populous nation on Earth. The capital and largest city of Finland is Helsinki, with about 1.3 million people and a density of 1,187 inhabitants per square mile. 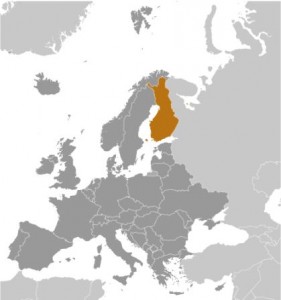 After being a grand duchy under Sweden from the 12th to the 19th centuries and then an autonomous grand duchy of Russia after 1809, Finland won its independence in 1917. Even though during World War II Finland lost some territories to the Soviet Union, it managed to remain independent from “The Red tide” unlike other European countries. Finland, which is now one of the most remarkable economies in the European Union, is ruled by President Sauli Niinistö and Prime Minister Jyrki Katainen (NCP).  The pillars of Finish society are high standard of education, equality promotion, and national social security system.

Located strategically in Northern Europe and bordering countries like Russia, with which has a long borderline, Norway and Sweden, Finland has a total surface of 130,596 square miles, being the 65th largest country in the world. Divided into 19 regions, Finland’s climate is cold as might be expected but tempered slightly by the effects of the North Atlantic Current and countless lakes. The terrain is largely comprised of plains dotted with lakes and rolling hills. The lowest point in Finland is the Baltic Sea, while the highest peak is Halti. Finland boasts many and varied natural resources but as might be expected, Finland faces a few environmental issues: air pollution from manufacturing and power plants contributing to acid rain, water pollution from industrial wastes, agricultural chemicals, and habitat loss that threatens wildlife populations.

The total population of Finland, which is concentrated on the small southwestern coastal plain, is of 5,266,114 people and it has a density of 41 inhabitants per square miles, the third-lowest population density of any European country. These numbers are in accordance with an  August 2013 estimate provided by CIA World Factbook. By the number of people, Finland is ranked 116th in comparison to the world. A 2012 estimate showed a total Finnish population of 5,421,827 people, while a 2000 census revealed a total population of 5,180,000 people. Between 2000 and 2013, in 13 years, Finland gained 86,114 people. As of 2013, the population growth rate is at a very low level – 0.06%. The literacy rate in Finland it’s at a maximum level: 100% for both males and females. On the other hand, the obesity rate in adults is of 23%. Life expectancy at birth of the total population is of 79.55 years, 76.09 years for males and 83.15 years for females.  Birthrate is of 10.36 births/1,000 population, death rate is of 10.42 deaths/1,000 population, while sex ratio of the total population is 0.96 male(s)/female. According to a population projection of Statistics Finland, on the assumption that the present development continues, the population of Finland will exceed 6 million in 2042. 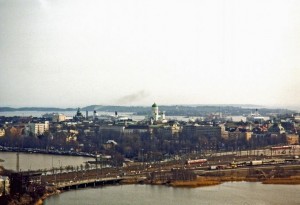 Helsinki, the capital and the largest city in Finland, is the northernmost national capital on the European continent. Located in southern Finland, Helsinki has a total population of 1,361,506 people and a density of 1,187.2 inhabitants per square mile. Helsinki is Finland’s major educational, cultural, research, political, and financial center. The next largest cities in Finland are Espoo (257,461 people) and Tampere (217,767 people). Other large cities in Finland are Vantaa – 205,653, Oulu – 191,237, Turku – 180,546. 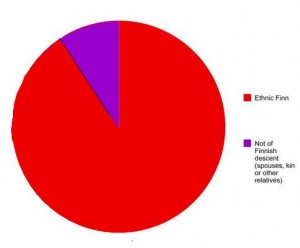 As stated by a 2006 estimate, Finn is the dominant ethnic group in Finland, accounting for 93.4% of the total population. The next important ethnic group is Swede and accounts for 5.6%. Other ethnic minorities in Finland are Russian (0.5%), Estonian (0.3%), Roma (Gypsy – 0.1.), and Sami (0.1%). Finland is also home to a small group of Vietnamese. However, the share of foreign citizens in Finland is 3.4%, among the lowest in the European Union. 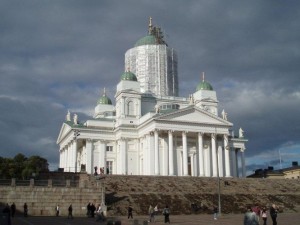 The official and dominant religion in Finland is the Evangelical Lutheran Church of Finland, practiced by 4.1 million (or 76.4% at the end of 2012). The second largest group in Finland, accounting for 21%, has no religious affiliation. Other minority religious groups in Finland are the Finnish Orthodox Church (1.1%), other Protestant denominations, the Roman Catholic Church, Muslim, Jewish and other non-Christian communities (totaling 1.4%). Adversely, the CIA World Factbook informs that, according to a 2006 estimate, the Lutheran Church of Finland accounted for 82.5%, Orthodox Church for 1.1%, other Christian for 1.1%, other for 0.1%, and none for 15.1%. 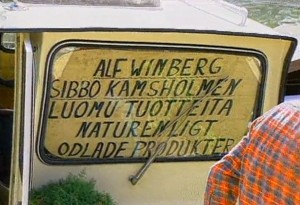 Finland has two official languages: Finnish, the native language of the majority of the population, which accounts for 90%, and Swedish, which accounts for 5.4% and is spoken in some coastal areas in the west and south and in the autonomous region of Aland. Other languages spoken in Finland are Sami (Lapp), an official language in northern Lapland, Finnish Romani and Finnish Sign Language, both recognized by the Constitution, and Nordic languages like Karelian. A 2007 estimate showed that Finnish was spoken by 91.2% of the population, Swedish by 5.5%, and small Sami- and Russian-speaking minorities by 3.3%. 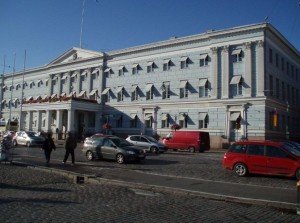 The Finnish economy is the most remarkable among the countries that form the European Union, with a GDP of $200.7 billion in 2012, maintaining itself at approximately the same level as in previous years – $201.1 billion in 2011 and $195.7 billion in 2010. Furthermore, per capita income is now among the highest in Western Europe – $37,000. Also, the unemployment rate is among the lowest in the European Union – 7.8%. Finland is a member of the European Union since 1995 and was the only Nordic state to join the euro system at its initiation, in 1999. Finland’s short-term challenges in 2013 are to stimulate economic growth in the face of weak demand in EU export markets and government austerity measures meant to reduce its budget deficit. On long-term, Finland must find a solid approach to current challenges: the aging of the population and the fluctuations of an export-driven economy.