Officially known as the Lao People’s Democratic Republic, Laos is the only landlocked country in Southeast Asia. Located northeast of Thailand and west of Vietnam, it has a surface of about 91,429 square miles, slightly larger than Utah, which makes it the 84th largest country in the world. The 2013 population of Laos is approximately of 1.7 million people with a density of 69.2 people per square mile. By population, Laos is ranked 102nd in the top of the most populous nations around the globe.

Laos, today a one-party communist state according to the Constitution promulgated on August 14, 1991 and amended in 2003, declared its independence from France on July 19, 1949. Since 8 June 2006, it is ruled by President Lt. Gen. Choummali Saignasone and by vice president Boun-Gnang Volachit (Bounnhang Vorachith). The country is divided in 16 provinces and one capital city and the civil law system is similar in form to the French one. The capital and largest city is Vientiane, which hosts about 799,000 people.

Bordered by Burma and China to the northwest, Vietnam to the east, Cambodia to the south, and Thailand to the west, Laos is a landlocked state. Most of the country is mountainous and thickly forested. The Mekong River (or Lancang River) forms a large part of the western boundary with Thailand. It has a total area of 91,429 square miles and it’s the world’s 84th largest country by surface. Laos is concentrated in 16 and one capital city, and provinces are further divided into districts and then villages. An “urban” village is essentially a town. The lowest point is Mekong River (about 21 feet) and the highest point is Phu Bia – 9,245 feet. The terrain consists of mostly rugged mountain and some plains and plateaus. The climate of Laos is influenced by the tropical monsoon and it has two seasons: the rainy season, from May to November, and the dry season, from December to April. On the other hand, local tradition holds that there are three seasons (rainy, cold and hot) as the latter two months of the defined dry season are noticeably hotter than the first four months. Also, Laos is party to some environment and international agreements: Biodiversity, Climate Change, Climate Change-Kyoto Protocol, Desertification, Endangered Species, Environmental Modification, Law of the Sea, and Ozone Layer Protection. 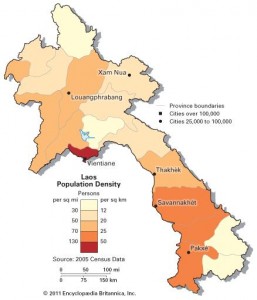 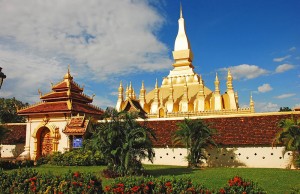 The largest city in Laos is Vientiane, which became capital in 1563 due to fears of a Burmese invasion. Vientiane, situated on the Mekong River near the border with Thailand, is home to 799,000 people. Most of Laos people believe the city’s name means “city of the moon”, while other claim correctly that Vientiane means “city of sandalwood”. Amongst others, Vientiane has formally established a sister city relationship with Orlando, from the United States. Savannakhet is Laos’ second most notable city after Vientiane. It forms an important trading post between Thailand and Vietnam. In Savannakhet live 825,879 people and the density is of 98 inhabitants per square mile. 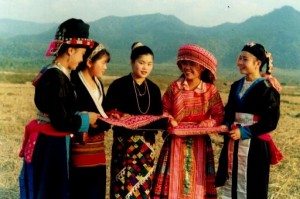 Rather than being divided according to their ethnic origins, the people of Laos are often considered by their distribution by altitude as lowlands – lowland Lao (Lao Loum) account for 68%, midlands – upland Lao (Lao Theung) for 22%, and highlands – highland Lao (Lao Soung, including the Hmong and the Yao) for 9%. According to a 2005 census, the Lao numbers 55%, Khmou 11%, Hmong 8%, and other (over 100 minor ethnic groups) 26%. Ethnic Vietnamese consists about 2% of the population. 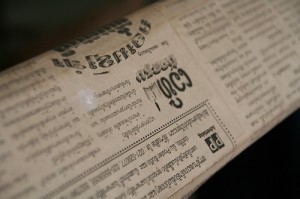 The official language in Laos is Lao, a tonal language of the Tai linguistic group. Even if it is the dominant language of the country, only slightly more than half of the population can speak Lao because people living in the rural areas use various ethnic minority languages. For example, Khmu, Hmong and other minority languages are spoken particularly in the midland and highland areas. French is another important language in Laos, where a third of the students are educated through French schools systems. The French language is also mandatory for all other students. Nevertheless, the most popular language is English, gaining more importance in schools during recent years. 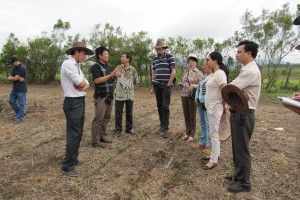 Despite a high growth rate between 2008 and 2012, Laos remains a country with an underdeveloped infrastructure, particularly in rural areas, according to CIA World Factbook. It has a basic, but improving, road system, and limited external and internal land-line telecommunications. Electricity is available in 75% of the country. Laos’ economy is heavily dependent on capital-intensive natural resource exports. The labor force, however, still relies on agriculture, dominated by rice cultivation in lowland areas, which accounts for about 30% of GDP and 75% of total employment. Economic growth has reduced official poverty rates from 46% in 1992 to 26% in 2010. The economy has also benefited from high-profile foreign direct investment in hydropower, copper and gold mining, logging, and construction though some projects in these industries have drawn criticism for their environmental impacts. In 2012, the GDP was estimated at $19.16 billion, making Laos the 133rd country in the world in matters of economy. GDP for capita in Laos is of $3,000, more than in 2011 – $2,800 and more than in 2010 – $2,600. Laos was admitted to the World Trade Organization (WTO) in 2012. The World Bank has declared that Laos’ goal of graduating from the UN Development Program’s list of least-developed countries by 2020 is achievable.

Freedom of religious express in the nation of Laos has long been a point of contention, especially as it refers to Protestant Christianity. Reports have offered evidence of local officials in varying capacities of responsibility pressuring minority protestants to renounce their faith under threats of violence and financial loss, societal discrimination and prejudices. Chief among prominent religious organizations in Laos is Theravada Buddhism boasting almost 5,000 temples throughout the country while animist beliefs are also common. As for Christianity, there are only three recognized churches in the Lao Evangelical Church, the Seventh-day Adventist Church and the Roman Catholic Church. Jehovah’s Witnesses and others are not formally recognized and often face persecution. Islam and Muslims are a tiny minority, only adding up to about .01% of the peoples. The Bahá’í Faith also has established communities in larger urban areas as do small groups of followers of Confucianism and Taoism beliefs.

Enjoy this interesting video on Laos and check back soon for projections on the 2014 population of Laos as well as some new maps and demographics data!