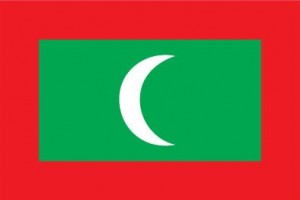 Maldives, officially the Republic of the Maldives and commonly referred to as the Maldive Islands, is an island nation in the Indian Ocean, between the Minicoy Island and the Chagos Archipelago. Located about 430 miles south-west of Sri Lanka and 250 miles south-west of India, Maldives is actually a double chain of twenty-six attols that lies in the Laccadive Sea. Maldives’ area is of only 115 square miles, which makes it one of the World’s smallest countries and dependencies by land surface, ranking 209th out of 249 nations. About 1.7 times the size of Washington, DC, Maldives is also the smallest country in Asia. As far as population is concerned, Maldives is the Earth’s 176th most populated state with roughly 400,000 inhabitants. Because of its location, the Republic of Maldives has no land boundaries, but benefits from a coast line of 400 miles. Its capital and largest city is Male. 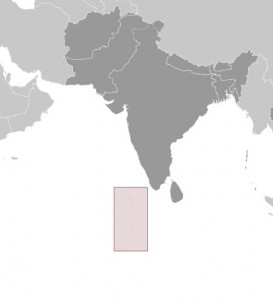 The countries name is said to be derived from the Sanskrit words “mala” and “dvipa”, which mean “garland” and “island” respectively, or from “Maala Divaina” in Sinhala language – “Necklace Islands”. According to several historical sources, the first settlers on the island were Dravidian fishermen from Kerala (in today’s India), who arrived between 300 BC and 300 AD. An independent state for the majority of its history, the Maldive Islands have been ruled by European colonists on three occasions. In the mid-15th century, the islands were dominated by the Portuguese Empire for fifteen years, while the Dutch Empire Malabar controlled Maldives for four months in the mid-17th century. Lastly, the Maldives became a British protectorate in 1887 until. It gained independence in 1965 and became a republic three years later.

Present-day Maldives is a unitary presidential constitutional republic ruled by President Mohammed Waheed Hassan Manik and Vice President Mohammed Waheed Deen. Its current constitution was established in August, 2008. The Maldives is a founding member of the South Asian Association for Regional Cooperation (SAARC), a member of the Commonwealth (since 1982) and of the Organization of Islamic Cooperation. “The Island President” is a 2011 doceumentary film about the efforts of then-President Mohamed Nasheed’s efforts to educate the world about the plight of the Maldives to fight submersion by the ocean. 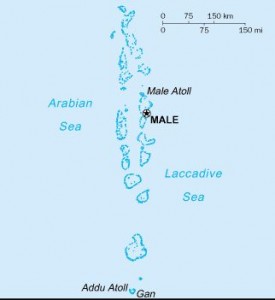 Located in the Indian Ocean, about 430 miles south-west of Sri Lanka and 250 miles south-west of India, the Maldives consists of 1,192 coral islands which are grouped in a double chain of 26 atolls. With a total area of 115 square miles, Maldives is the smallest country in Asia and the world’s 209th largest state. However, because it’s spread over 35,000 square miles from north to south, Maldives is one of the World’s most dispersed countries. The Maldives is divided into seven provinces, which comprise 20 administrative atolls and Male city. The climate in the Maldives, which is affected by the presence of the large landmass of South Asia to the north, is dominated by two seasons – a dry wintery monsoon season and a rainy season with strong winds and storm. Because the islands have an average ground level of only five feet above sea level (the highest point is at eight feet) making it the Earth’s lowest country, Maldives are ranked the third most endangered nation due to flooding from climate change. In 2012, the country’s president was quoted saying that “if carbon emissions continue at the rate they are climbing today, my country will be underwater in seven years.” 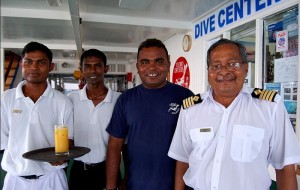 According to an estimate provided by the CIA World Factbook, as of July 2013, Maldives is inhabited by 393,988 people, ranked 177th in comparison to the World. Numbering only about 100,000 people in 1965, Maldives’ population double by 1978 due to improving health and reached 298,968 in 2006, when the last official census was carried out. More than one third of the country’s population is made out of foreign employees and illegal immigrants from neighboring Asian countries such as Sri Lanka, Bangladesh, and Nepal. At the time of writing, the Republic of Maldives has a negative population growth rate of -0.11 percent and a birthrate of 15.38 births/1,000 population. Life expectancy is rated at 72.65 years for males and 77.31 years for females, which translates into a population total of 74.92 years. For 2013, sex ratio is estimated at 1.34 males/female, while net migration rate is -12.65 migrants/1,000 population. Maldives has one of the highest net emigration (people leaving the country) rates in the world, being surpassed by only seven nations (Nauru, Northern Mariana Islands, Tonga, Syria, Micronesia, Jordan, and American Samoa). 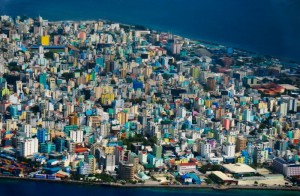 Malé (pronounced MAH-lay) is the capital and largest city in Maldives. The 2006 census revealed that the city’s population was 103,693 people, but it’s believed the number has grown by at least 30 percent by 2013. Male has an area of only 2.2 square miles and a density of at least 46,000 people per square mile. The city is located on four islands and is located in the Kaafu Atoll. A harbor located on the Male Island is the heart of all commercial activities in Maldives. The next largest cities by population are Addu City (31,999) Fuvahmulah (11,857), and Kulhudhuffushi (9,500). 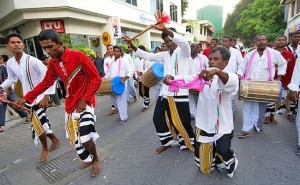 According to Wikipedia, the Maldivian ethnic identity “is a blend of the cultures reflecting the peoples who settled on the islands, reinforced by religion and language.” The largest ethnic group are Dhivehis. Maldivian Dhivehi are an Indo-Aryan people closely related to the Sinhalese, but with traces of Arab, Malay, South Indian and African genes. This is why some sources say Maldive has three ethnic groups: South Indians, Sinhalese, and Arabs. The island is also inhabited by a very small number of Giraavaru people, a group that has been almost completely absorbed by the Dhivehis. 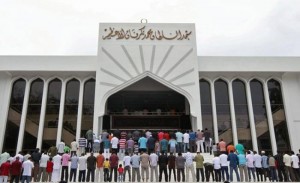 Even though Buddhism was the predominant religion until the 12th century, Sunni Muslim is now the official religion in Maldives, being practiced by the vast majority of the population. Foreign workers, which represent around 14 percent of the country’s inhabitants, are allowed to practice their religions only in private. Freedom of religion is restricted, with the government requiring, based on the Constitution, that “all citizens must be Muslims”. 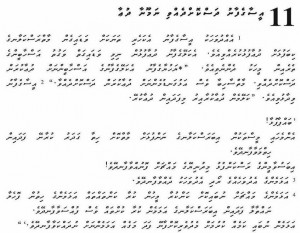 The official and language in Maldives is Dhivehi. Spoken by the entire population, Dhivehi, or Maldivian, is an Indo-European language similar to the ancient Sinhalese language and uses a script derived from Arabic. A dialect is also spoken in Maliku (Minicoy) Island in the Lakshadweep islands of India which is known as Mahal or Mahl. English is widely used in commerce, schools, and by government officials.

Tourism is the Maldives’ largest economic activity and accounts for about 28 percent of GDP, while fishing is the second economic sector with contributions of over 15 percent to the country’s GDP. Other important industries include shipping, boat building, coconut processing, garments, and woven mats. By GDP over purchasing power parity Maldives ranks 181st in the World with $3.1 billion in 2012. GDP per capita by PPP is at $9,400 (122nd in the World). More than 16 percent of the population live below the World Bank’s poverty line.