Moldova, officially the Republic of Moldova, is a landlocked country situated in Eastern Europe, northeast of Romania. With a total surface of 13,067 square miles, Moldova is slightly larger than Maryland, making it the 140th largest country in the world. Moldova’s 2013 population is approximately 3,600,000 people and has a density of 316 inhabitants per square mile. By population, Moldova is the 130th most populous nation on Earth. Chisinau is the capital and the largest city in Moldova, with a population of about 800,000 people and a density of 14,060 inhabitants per square mile. 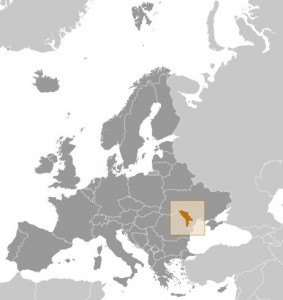 Moldova was part of Romania during the interwar period and following World War II it was assimilated into the Soviet Union. Even though Moldova became independent in 1991, with the dissolution of the Soviet Union, Russian troops may still be found occupying areas east of the Nistru River, supporting a Transnistrian separatist region composed of a Slavic majority population (mostly Ukrainians and Russians), but with a sizable ethnic Moldovan minority. Although in 1994 Moldova adopted a new Constitution in replacement of the 1979 Soviet Constitution, in 2001 it became the first former Soviet state to elect a communist, Vladimir Voronin, as its president. Voronin was the president of Moldova until 2009, when he resigned. Between 2009 and 2012, Moldova experienced significant political uncertainty. In 2009, four Moldovan opposition parties formed the coalition “Alliance for European Integration (AEI)”, which constituted as the governing coalition since May 31 2013, when Iurie Leanca was named Prime Minister by President Nicolae Timofti.

Situated in Eastern Europe, Moldova is bordering Romania to the west and Ukraine to the north, east, and south. Moldova’s total area is of 13,067 square miles, ranked 140th in comparison to the world. Moldova is divided into 32 raions, three municipalities (Balti, Bender, Chisinau), one autonomous territorial unit (Gagauzia ), and one territorial unit (Stinga Nistrului – Transnistria). Moldova faces natural hazards like landslides and has environmental issues like heavy use of agricultural chemicals, including banned pesticides such as DDT. Moldova has, as well, contaminated soil and groundwater and extensive soil erosion from poor farming methods. The climate is constituted of moderate winters and warm summers, while the terrain is made of rolling steppe and gradual slope south to Black Sea. Moldova’s natural resources are lignite, phosphorites, gypsum, arable land, and limestone. The lowest point in Moldova is Dniester (Nistru), while the highest peak is Dealul Balanesti (1,411 feet). 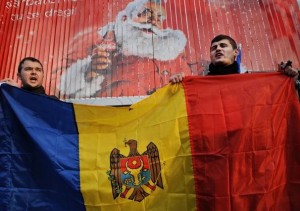 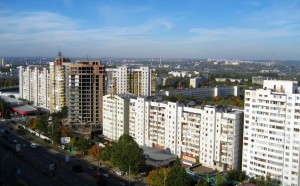 The capital and the largest city in Moldova is Chisinau, historically also known as Kishinev, from Russian. Chisinau has a total area of 217.5 square miles, a total population of 800,600 people and a density of 4,060 inhabitants per square mile. According to historians, Chisinau was founded in 1436 as a monastery village and was part of the Principality of Moldavia. Starting with the 16th century, the Principality of Moldavia fell under the suzerainty of the Ottoman Empire. The next largest cities in Moldova are Balti – 149,700 people, Tiraspol – 135,700 people, Bender – 93,751 people, and Ribnita – 56,988 people. 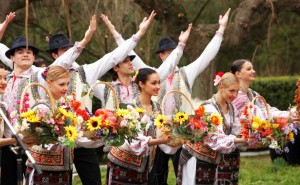 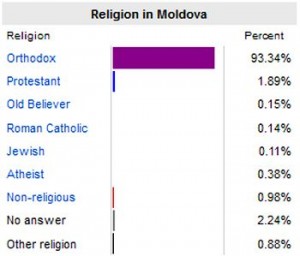 The dominant religion in Moldova is Orthodox Christianity, accounting for 93.3% of the total Moldovan population, in accordance to the 2004 census. On the other hand, the respondents weren’t asked to declare which of the two main churches they belong to: the Moldovan Orthodox Church, autonomous and subordinated to the Russian Orthodox Church, or the Orthodox Church of Bessarabia, autonomous and subordinated to the Romanian Orthodox Church. However, both churches claim to be the national church of Moldova. The next largest important religious group in Moldova is Protestant (1.9%), 0.9% belongs to other religions, 1.0% is non-religious, 0.4% is atheist, and 2.2% did not participate at the census. Adversely, a 2000 census cited by CIA shows that there were 98% Eastern Orthodox 98%, 1.5% Jewish and 0.5% Baptist and of other religions. Over 20,000 Jehovah’s Witnesses worship in Moldova. 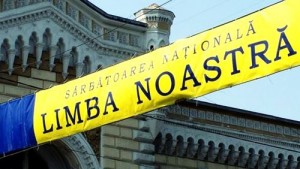 Two main important documents in Moldova’s actual progress state two different things: the 1994 Constitution states that Moldovan is the official language, while the 1991 Declaration of Independence named Romanian the official language of Moldova. Moreover, State Language Law, from 1989, recognized the linguistic identity as Moldovan-Romanian. A conclusion would be that the official languages of Moldova are both Moldovan and Romania because Moldova is virtually the same as the Romanian language. 76.51% of the Moldovan population is native in Moldovan (Romanian), 11.26% in Russian, 5.51% in Ukrainian, 4.07% in Gagauz (a Turkish dialect), 1.61% in Bulgarian, and 1.04% in other languages. By language of first use, 75.17% of the total population speaks Moldovan (Romanian), 15.99% Russian, 3.85% Ukrainian, 3.10% Gagauz, 1.14% Bulgarian, and 0.75% speak other languages. 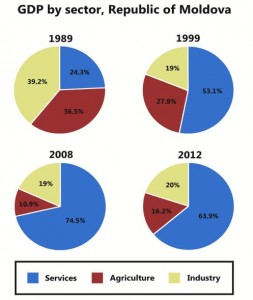 Despite recent progress, Moldova remains one of the poorest countries in Europe.  Because its natural resources are poor, Moldova is dependent on Russia and Ukraine, from where it imports all of its energy supplies.  With an economy relying mostly on agriculture, Moldova’s GDP in 2012 was of $12.36 billion, lower than the one in 2011 – $12.46 billion – but higher than the one on 2010 – $11.66 billion. In 2009, Moldova experienced a 6% contraction of the GDP as an effect of decrease in remittances and an increased unemployment. While in 2010 and in 2011 Moldova had an economic growth rate of 7.1%, respectively 6.8%, in 2012 it registered a negative growth of -0.8%. With a GDP per capita of $3,500, 21.9% of the Moldovans live below World Bank’s poverty line. In the fall of 2009, the International Monetary Fund (IMF) allocated to Moldova $186 million in order to cover its immediate budgetary needs. Shortly after, Moldova signed a program worth $574 million. While the government’s primary goal is EU integration, Moldova has made some market-oriented progress. But the country is pulled back because of corruption and strong political forces backing government controls. As for long-term challenges, Moldova’s economic future remains vulnerable to political uncertainty, vested bureaucratic interests, the concerns of foreign investors, weak administrative capacity and higher fuel prices as well as the presence of an illegal separatist regime in Moldova’s Transnistria region.