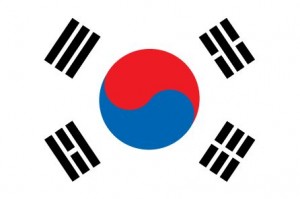 South Korea, officially the Republic of Korea, is a country located in the southern part of the Korean Peninsula in East Asia. With a total area of 38,691 square miles, South Korea is the world’s 109th largest country by total land mass. Population-wise, the Republic of Korea is ranked 25th, being home to 48.9 million people and having a density of about 1,270 inhabitants per square mile. South Korea’s capital and largest city is Seoul. The whole metropolitan area has a total population of 25.6 million people. 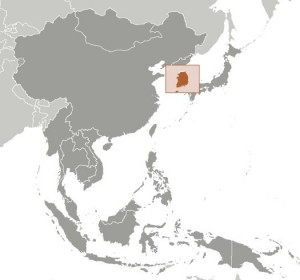 Korean foundation mythology states that Korean history began in 2333 BC, when the Kingdom of Gojoseon (Chosun) was founded by Dangun Wanggeom, also known as the “grandson of heaven”. October 3, 2333 BC is the country’s official National Foundation Day. The Korean peninsula was united by Emperor Taejo of Goreyo in 936, a dynasty which was replaced by the Joseon Dynasty in 1392. The territory was renamed the Korean Empire following the 1894-1895 Sino-Japanese War and was annexed by the Empire of Japan in 1910. The peninsula was divided into two occupied zone after the surrender of Japan at the end of World War II in 1945, with the southern half occupied by the United States and the northern half under Soviet rule. After United States and Soviet forces withdrew from Korea, the North invaded the South marking the beginning of the Korean War, which lasted from 1950 through 1953. The conflagration was ended by an armistice, but no official peace statement was made to this day.

Following several decades of unrest and political upheaval, including president Park Chung-hee’s assassination in 1979, South Korea came under democratic rule in 1987, after the 6.29 Declaration was signed. The country became a member of the Organization for Economic Co-operation and Development (OECD) in 1996. Although it was severely affected by the 1997 Asian Financial Crisis, South Korea recovered rapidly and continued its economic growth. The Republic of Korea is now ruled by a unitary presidential constitutional republic under President Park Geun-hye. 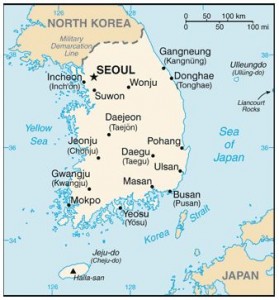 South Korea occupies the southern portion of the Korean Peninsula, being bordered by the Yellow Sea to the west, and Sea of Japan to the east, and the Korea Strait and the East China Sea to the south. The Republic of Korea also has 147 miles of land boundaries with North Korea to the north. Slightly larger than the American state of Indiana, South Korea has a total area of 38,691 square miles, which makes it the world’s 109th country by surface. South Korea’s terrain is mostly mountainous, with only 30 percent of its territory made out of lowland areas. The Republic of Korea is surrounded by about three thousand islands, mostly small and uninhabited. The largest of them all, Jeju-do Island, is the site of South Korea’s highest point – Hallasan, an extinct volcano, at 6,398 feet. Home to 20 national parks, South Korea has a humid continental climate and a humid subtropical climate, also being affected by the East Asian monsoon. 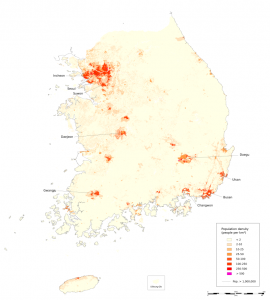 Home to 48,955,203 people according to a July 2013 estimate provided by the CIA World Factbook, South Korea is the 25th most populous country in the world. The Republic of Korea has a density of 1,270 people per square mile, more than ten time the global average (see photo on the right). The last population census, which occurred in 2010, revealed a total population of 48.5 million people, 1.3 million (2.8 percent) more when compared to the 2005 census. The first official census, taken in 1949, showed a total population of 20.2 million people, which means that the country’s number of inhabitants grew by about 240 percent until 2010. In 2013, South Korea has a population growth rate of only 0.18 percent, while life expectancy is estimated at 79.55 years, with 76.4 years for males and 82.91 years for females. Birthrate in South Korea is of 8.33 births/1,000 population and sex ratio is 1 male/female. North Korea’s population is expected to reach 34 million people by 2045. The country’s population is expected to stabilize at around 52.6 million people in 2023. The next scheduled census to determine the population and demographics of South Korea is set to begin in late 2014 and finalize in 2015. 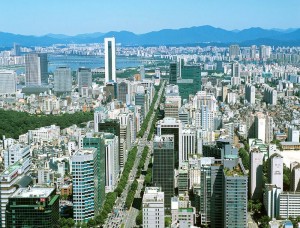 The largest city in South Korea is Seoul. Also the country capital city, Seoul’s entire metropolitan area, which includes the surrounding Incheon metropolis and Gyeonggi province area, has a total population of 25,620,000 people. By population, the Seoul Capital Area is the world’s second largest metropolitan area, behind Tokyo, Japan, and home to over half of South Koreans. The Seoul metropolitan area contains four UNESCO World Heritage Sites – Changdeok Palace, Hwaseong Fortress, Jongmyo Shrine and the Royal Tombs of the Joseon Dynasty – and three landmark holding Guinness World Records. These include Lotte World, the world’s largest indoor theme park, Moonlight Rainbow Fountain, the world’s longest bridge fountain, and Times Square’s CGV Starium, the world’s largest cinema screen. The second most populated city in South Korea is Busan, with 3.4 million inhabitants. Incheon is home to 2.6 million people, while Daegu has a population of 2.4 million people. 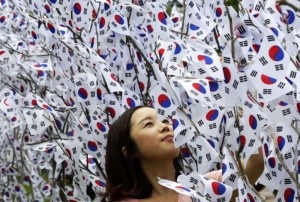 South Korea is a homogenous society with the majority of the population being of Korean ethnicity. However, some reports claim that more than one million citizens of China live in South Korea as permanent residents or illegal immigrants. There are also about 30,000 United States military personnel and civilian employees throughout the country. Additional ethnic demography will be available with the completion of the next South Korean census. 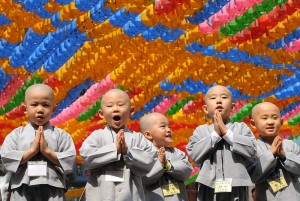 According to the CIA World Factbook, quoting a 2010 survey, 43.3 percent of the population declared themselves as having no religion.  However, most South Koreans continue to observe traditional Buddhist and Confucian philosophies. Officially, 24.2 percent of the country’s inhabitants are followers of the Buddhist religion, while 24 percent are Protestants. Roman Catholicism is spread among 7.6 percent of the population. Other religions, about 0.9 percent, include Confucianism, Islam, Hinduism, Judaism, as well as Korean shamanism (Muism or Sinism). Over 100,000 Christian Jehovah’s Witnesses also worship peacefully in South Korea.

The vast majority of the population speaks the Korean language. English is widely taught in junior high and high school, as well as in higher education. The Japanese language, an official language in South Korea, is no longer used. 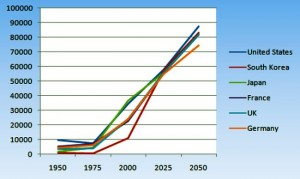 South Korea’s market economy which ranks 15th in the world by nominal GDP and 12th by purchasing power parity (PPP), being part of the G-20 major economies. Rated as a high-income developed country, South Korea is the most industrialized member of the OECD. Furthermore, South Korea was one of the few developed countries that were able to avoid a recession during the global financial crisis of 2007 and 2008. In 2012, the GDP by purchasing power parity was rated at $1.64 trillion, while GDP by official exchange rate was 1.15 trillion. The South Korean economy’s long term challenges include a rapidly aging population, inflexible labor market, and heavy reliance on exports.

Please bookmark this page and visit us again soon as we’ll be publishing addition population and demographics data for South Korea as it becomes available in late 2013 or early 2014. Much of the information here is based on projections from 2012 data or the latest 2010 census. We aill also be making a current religious map of South Korea available.