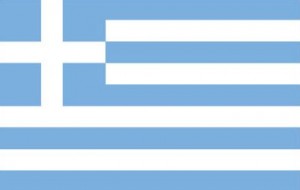 Greece, officially known as the Hellenic Republic and mostly known for the mythological stories of the Olympian gods, is a country situated in Southern Europe between Albania and Turkey, bordering the Mediterranean, Ionian and Aegean Sea. Greece has a total surface of 50,949 square miles and it’s slightly smaller than Alabama. By land mass, Greece is the 97th largest country in the world. The 2013 population of Greece is about 10,700,000 people and it has a density of 212 inhabitants per square mile. Athens is the capital and the largest city in Greece, with a population of approximately 3.7 million people and a density of 3,319 inhabitants per square mile. 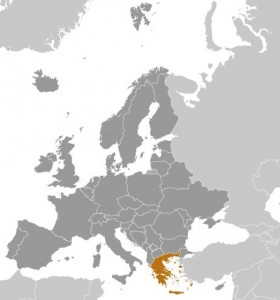 Greece became independent from the Ottoman Empire in 1830 and during the second half of the 19th century and the first half of the 20th century, it kept adding new territories, most with Greek-speaking populations. During World War II, Greece was invaded by Italy in 1940 and was subsequently occupied by Nazi Germany (1941-44). After joining the North Atlantic Treaty Organization in 1952, Greece became a military dictatorship in 1967. Greek monarchy was abolished in 1974, as an effect of the democratic elections and of the referendum held then. In 1981, Greece joined the EC (now the European Union) and in 2001 it became the 12th member of the European Economic and Monetary Union in 2001. Because of the austerity measure and of the huge public debt, Greeks protested with street fights and with labor strikes. In 2012, Greece was bankrupt and was temporarily saved by money lent from creditors like Germany, Netherlands, and International Monetary Fund (IMF). Despite the help back then, economists ask themselves today if Greece can be saved from default considering that the Greek economy hasn’t recovered so far. 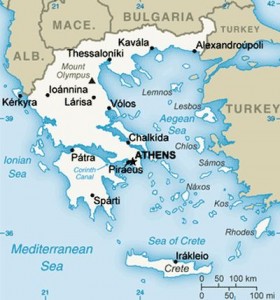 Greece is strategically located in Southern Europe, with a dominant position in the Aegean Sea and Turkish Straits. Boasting an archipelago of about 2,000 islands, the peninsula of Greece borders Albania, the Republic of Macedonia, and Bulgaria to the north and Turkey to the northeast. Divided into 13 administrative regions and one autonomous monastic state (the autonomous monastic state of the Holy Mountain), Greece has a total area of 50,949 square miles, ranked 97th in comparison to the world. Greece is often hit by earthquakes and it has still active volcanoes. For instance, Santorini (1,204 feet) has been deemed a “Decade Volcano” by the International Association of Volcanology and Chemistry of the Earth’s interior, worthy of study due to its explosive history and close proximity to human populations. Although there have been very few eruptions in recent centuries, Methana and Nisyros in the Aegean are classified as historically active. Regarding environmental issues, Greece has problems with air and water pollution. The climate in Greece is temperate, with mild, wet winters and hot, dry summers. The terrain consists of mostly mountains with ranges extending into the sea as peninsulas or chains of islands and covers natural resources like lignite, petroleum, iron ore, bauxite, lead, zinc, nickel, magnesite, marble, and salt. The lowest point in Greece is the Mediterranean Sea, while the highest peak is the legendary Mount Olympus (9,577 feet). 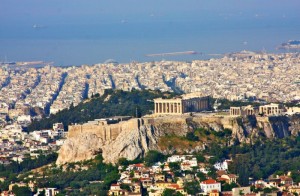 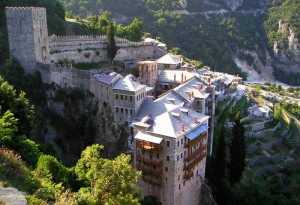 The Constitution of Greece recognizes Orthodox Christian faith as the “prevailing” faith of the country and guarantees freedom of religious belief for all. The official and dominant religion in Greece is Greek Orthodox, practiced by 98% of the population. 1.3% of the people living in Greece are Muslim and 0.7% of the population follows other religions. A census that took place in 2010 showed that 79% of the Greeks believe in God, 16% believe in spirit or life force, while 4% have no belief. About 30,000 Jehovah’s Witnesses worship in Greece but have historically faced intense persecution from authorities and the Greek Orthodox Church. 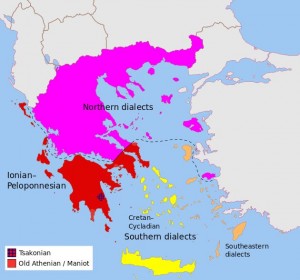 The official language in Greece is Greek, spoken by 99% of the population. But, at the same time, in Greece are also used a number of non-official, minority languages and some Greek dialects as well as regional languages such as Cretan, Pontic, Cappadocian, Ancient, Cypriot, Maniot, Demotic, Albanian Tsakonian and Yevanic. Albanian (Arvanitika), Romany, Turkish, Macedonian Slavic, Bulgarian, Armenian language and Aromanian are minority languages. The first foreign language spoken in Greece is English, followed by German and French. 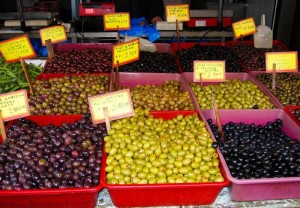 Among all European countries, Greece experienced the harshest effects due to public debt. Greece faced its most severe crisis in 2009 and in 2010 it borrowed money from banks like Goldman Sachs, JP Morgan Chase and others. But these liabilities made governments like the one in Athens spend beyond its means. In 2010, Greece public debt was the second highest in the world. In 2012, after several negotiations and rapid loans, Greece agreed to an agreement which included strict conditions, including financial reforms and further austerity measures. As for numbers, Greece’s GDP in 2012 was of $281.4 billion, lower than the country’s GDP in 2011 – $300.6 billion – and than the one in 2010 – $323.6 billion. Also, Greece recorded a negative growth rate between 2010 and 2012: -6.2% in 2012, -7.1% in 2011, and -4.9% in 2010. With a GDP per capita of $24,900, 20% of the Greeks live under World Bank’s poverty line. Greece’s lenders are calling on Athens to step up efforts to increase tax collection, privatize public enterprises, and rein in health spending, and are planning to give Greece more time to shore up its economy and finances. But many investors doubt that Greece can sustain fiscal efforts in the face of a bleak economic outlook, public discontent, and political instability.

Greece is a major gateway to Europe for Asians and especially Africans which has led to clashes and racial violence.