Officially known as the Republic of India (Bharat Ganrajya), India is a country in South Asia. It is the second-most populous country in the world with 1.2 billion people (2011 census, 2013 population data forthcoming), surpassed only by China with 1.33 billion people. Also, India is the seventh-largest nation by area, having a total surface of 1.26 million square miles (3.28 sq km). India shares land borders with Pakistan, China, Nepal, Bhutan, Burma (Myanmar) and Bangladesh, while also being bounded by the Indian Ocean, the Arabian Sea and the Bay of Bengal. Located at the juncture of the Bay of Bengal and Andaman Sea, the Andaman and Nicobar Islands are part of India as well.

India declared its independence from Great Britain on August 15, 1947, but the whole process was completed in January 20, 1950, when the new Constitution established the Republic of India. The country’s capital city is New Delhi (11 million people), but India’s biggest metropolitan area is Mumbai, which has an official population of 12.4 million.

India’s economic liberalization begun in 1990 and led to the creation of a large urban middle class, transforming the country into one of the world’s fastest-growing economies. However, India is still affected by both rural and urban poverty, as well as religious and caste-related violence. Since declaring its independence, India has been through several territorial disputes with neighboring countries China and Pakistan, with the Kashmir separatist movement leading to several armed confrontations between Indian and Pakistan.

India, which is the world’s most populous democracy, is a parliamentary republic with a multi-party system and it has six recognized national parties, including the Indian National Congress and the Bharatiya Janata Party (BJP), and more than 40 regional parties. The Congress is considered centre-left or liberal in Indian political culture, and the BJP centre-right or conservative.

Occupying most of the Indian subcontinent, the country sits on the Indo-Australian Plate and has a total area of 1,269,219 square miles and a coastline of 4,700 miles. India is the world’s seventh-largest country, being surpassed by Russia, India, China, the United States, Brazil and Australia. India’s most important rivers are the Ganges and the Brahmaputra, both of which are of Himalaya origin and drain into the Bay of Bengal. Strongly influenced by the Himalayas and the Thar Desert, the Indian climate is predominated by four major climatic groupings: tropical wet, tropical dry, subtropical humid and montane. Summer lasts between March and June in most parts of India, with temperatures that can exceed 104 Fahrenheit during the day. The coastal regions exceed 86 F, while in the Thar desert area temperatures can rise well above 113 F. However, temperatures in some parts of the Indian plains can fall below freezing. The highest temperature recorded in India was 123 F and the lowest was −49 F in Kashmir. 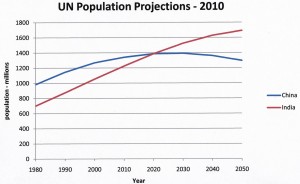 India’s total population is projected to reach 2 billion by the end of the 21st century. At the time of writing, India has a population growth rate of 1.28 percent and a birthrate of 20.24 births/1,000 population. Life expectancy is rated at 66.38 years for males and 68.7 years for females, which translates into a population total of 67.48 years. For 2013, sex ratio is estimated at 1.80 male/female, while net migration rate is -0.05 migrants/1,000 population. 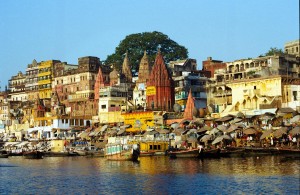 Varanasi – the religious capital of India

According to the CIA World Factbook, India’s population has two major ethnic groups: Indo-Aryan, which comprises about 72 percent, and Dravidian – 25 percent. Mongoloid and other ethnic peoples represent 3 percent of the total population. Since the 2011 census didn’t include data on ethnicity, the aforementioned estimate is based on 2000 data. 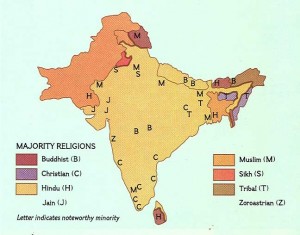 India is also famous for its plethora of religions, including  Islam, Hinduism, Jainism, Sikhism, and Christianity. According to 2001 census data (no 2011 census numbers have been released), Hinduism is the country’s largest religion with 80.5 percent of the population. Hinduism is followed by Islam (13.4%), Christianity (2.3%), Sikhism (1.9%), Buddhism (0.8%) and Jainism (0.4%). Other religions include Judaism, Zoroastrianism, and the Bahá’í Faith. Furthermore, India has the world’s largest Hindu population, and the largest Muslim population for a non-Muslim majority country.

Known as a pluralistic, multilingual, and multi-ethnic society, India is home to hundreds of languages, 23 of which are spoken by more than one million people each. However, languages spoken in India can be grouped into two main linguistic families – Indo-Aryan languages (74 percent) and Dravidian languages (24 percent). Other languages spoken in India come from the Austroasiatic and Tibeto-Burman language families. While India has no national language, Hindi, which has the largest numbers of speakers, is the official language of the government. The most important languages are Hindi (41%), Bengali (8.1%), Telugu (7.2%), Marathi (7%), Tamil (5.9%), Urdu (5%), Gujarati (4.5%), Kannada (3.7%), Malayalam (3.2%), Oriya (3.2%), Punjabi (2.8%), Assamese (1.3%) and Maithili (1.2%). English is used extensively in business and administration and enjoys the status of “subsidiary official language”.

According to a 2012 estimate provided by the CIA World Factbook, India has a purchasing power parity GDP of $4.784 trillion, which ranks it in fourth place behind the United States, the European Union and China. Official exchange rate GDP is rated at $1.947 trillion. While being one of the world’s fastest-growing economies, India ranks only 166th in the world in GDP per capita at PPP. As of 2012, India’s 498.4 million labor force is the world’s second-largest, next only to China’s. 29.8 percent of India’s population lives below the World Bank’s international poverty line.

Please visit us again as we’ll be adding relevant 2014 demography and population data for India as well as links to some breaking political news and a current religious map. Things are changing rapidly in India! Many of our visitors are searching for information on current human slavery and child labor laws in India.